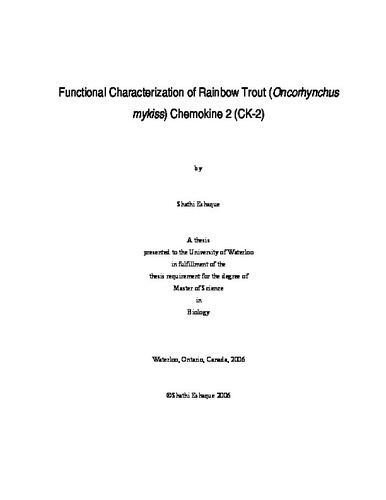 Chemokines are cytokines with chemoattractant ability, and comprise one of the major groups of molecules in immune system. These are small, secreted proteins cause the migration of leukocytes to the sites of injury. Over 40 mammalian chemokines have been identified to date, and they have been implicated in a number of immune mediated processes, including regulation of inflammation, antigen presentation, blood cell development, metastasis, viral infection and wound healing. In rainbow trout, there have been fewer chemokines reported and only one functional study has been published. Rainbow trout chemokine 2 (CK-2) is the only known CC chemokine with a mucin stalk, which has the potential for extensive <em>O</em>-glycosylation. However, no functional characterization has been performed on this molecule yet. CK-2 shares the presence of a mucin stalk with the mammalian chemokines, fractalkine (CX<sub>3</sub>CL1), lymphotactin (XCL1), and CXCL16. Another related trout CC chemokine sequence, CK-2. 1, has been discovered recently, which has 98% nucleotide sequence identity with CK-2. CK-2. 1 was believed to be a separate gene due to its apparent differential regulation in challenged rainbow trout. The question remained, however, whether or not CK-2. 1 was a separate gene or an allele of CK-2. The goal of this project was to further characterize both CK-2 and CK-2. 1. <br /><br /> Through genomic PCR on several outbred individuals it was shown that CK-2. 1 is an allele of CK-2 but not a separate gene. Reverse transcriptase (RT) PCR analysis revealed an increased level of transcript both CK-2 and CK-2. 1 in response to phytohaemagglutinin (PHA) stimulation of head kidney leukocytes (HKL) and peripheral blood leukocytes (PBL) collected from fish with different allelic distributions. Similar results were also observed in the rainbow trout macrophage/monocyte cell line, RTS11. Moreover, an anti-CK-2 antiserum was developed in rabbits, which cross-reacted with CK-2. 1. This newly produced antibody was used to determine the protein expression levels in PHA stimulated rainbow trout tissues. RT-PCR was also performed on the same tissues in order to examine the transcript expression. Rainbow trout with both CK-2 and CK-2. 1 were used for this experiment. An overall decreasing pattern of transcript (both CK-2 and CK-2. 1) was observed in brain and HK over 24 hours, while protein was still detected at 24 hours post stimulation. However, in spleen the CK-2 transcript showed a slight upregulation at 4 hours post stimulation along with a very little or no CK-2. 1 expression, although no protein was detected in spleen. Liver showed a very low level of CK-2 and CK-2. 1 transcript at 8 hours post stimulation; while protein was again detected at 24 hours post stimulation. In addition, the sizes of the proteins found in different tissues were larger than expected (&le;30 kDa for CK-2 or &le;35 for CK-2. 1), perhaps due to the presence of extensive <em>O</em>-glycosylation at the mucin stalk of the protein. <br /><br /> A chemotaxis assay was carried out, which is the definitive assay for chemokine activity. This assay showed migration of peripheral blood leukocytes across a membrane with 5µm pores toward CK-2 at an optimal concentration of 500ng/ml (17nm). Moreover, by pre-treating the recombinant chemokine with the polyclonal antisera, it was shown that the chemokine was actually causing the chemotactic activity. Pre-treatment of the cells with pertussis toxin, an inhibitor of G-protein signalling inhibited the migration of PBLs, established the fact that CK-2 caused chemotaxis by binding to a 7 transmembrane, G-coupled receptor just like all other known chemokines. Interestingly, CK-2 was also shown to attract RTS-11 cells. <br /><br /> Overall, the above findings indicate that CK-2 is functionally a chemokine with two very different alleles in rainbow trout. It is probably heavily <em>O</em>-glycosylated and different tissues express different sizes of the protein. This is only the second functional study of a fish chemokine.