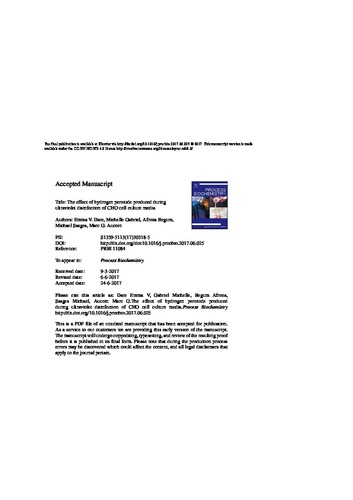 Ultraviolet (UV) irradiation is being considered for protection against viral contamination in cell culture media. Hydrogen peroxide (H2O2) produced by UV irradiation has been suggested as the cause for poor cell growth in irradiated media, but this hypothesis has not been carefully evaluated. The impact of H2O2 on Chinese Hamster Ovary (CHO) cell culture medium was compared with the impact of UV irradiation. Media composition was analyzed via nuclear magnetic resonance (NMR) spectroscopy and liquid chromatography mass spectrometry (LCMS), and cell growth in treated media was also evaluated. Although addition of H2O2 to medium caused significant changes in pyruvate, formate, acetate, and sarcosine concentrations, there was less effect on CHO cell growth compared with irradiation. UV irradiation caused other changes in composition that did not occur as a result of H2O2 addition. Catalase inhibited the effects of adding H2O2 to the media, but catalase added before irradiation did not affect most irradiation-induced changes, even though catalase retained activity. In conclusion we found that while H2O2, which can be generated as a result of UV-irradiation, may be the cause of some changes in medium composition, it does not directly account for impaired CHO cell growth after high UV doses.