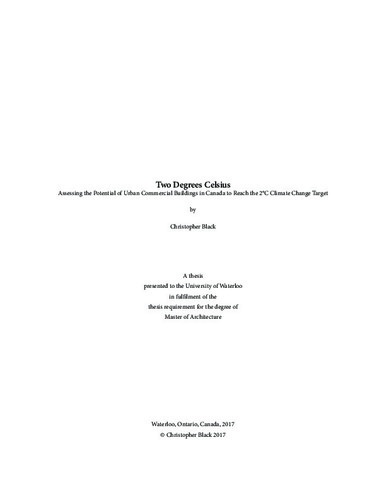 To avoid the catastrophic effects of climate change, scientific consensus and international convention have determined that the mean rise in global temperatures must be limited to between 1.5°C and 2.0°C. The Intergovernmental Panel on Climate Change suggests the building sector possesses the most immediate mitigation potential and has proven technological and design capability at hand. To meet this goal, a 55% reduction is required compared to a proposed Business-As-Usual Scenario forecast in emissions between 2005 and 2050. For Canadian commercial buildings, this is equivalent to emissions dropping from 88.4 MtCO₂e to 39.8 MtCO₂e/yr. Between 2005 and 2050, the floor area of commercial building is expected to double from 654.2 million m² to 1,139.5 million m² while the emissions are to be halved. The proposed model suggests that, by 2050, new and substantially renovated buildings should emit 15.3 kgCO₂e/m² /yr to achieve this. When combined with existing buildings, the blended emissions cap is expected to be 34.9 kgCO₂e/m²/yr. Given that in 2013 new, renovated, and existing buildings in Canada was 46.67 kgCO₂e/m²/yr, this ambitious target implies a significant transformation of commercial buildings. When consistently applied to every building, the 15.3 kgCO₂e/m²/yr rate suggests an evolving approach to design. This is especially true for urban sites where passive design and renewable energy opportunities are limited. Although there are a number of built projects that meet the criteria, they remain the exception rather than the norm and deploy a maximum of energy efficient technologies and design strategies. A full range of innovative passive and active building technologies is leveraged, and many examples are most often not situated in a dense urban environment. Using an emission rate per square metre reflects a "bottom-up" approach to transforming Canadian commercial buildings. Rather than relying on sweeping policy intervention or mandating particular technologies, this metric can be used to bring the various drivers of emissions together for a particular building, thus allowing the most applicable technologies and strategies to be selected on a case-by-case basis. The thesis will demonstrate that a suite of measures focused on the combination of energy conservation and fuel choice can not only achieve this target on urban projects with limited passive means but suggest that the adoption of further passive and active technologies could push performance even further. To investigate the implications of the emission cap in this context, a demonstration project is proposed and sited in three different locations on a prototypical urban block. Located on a north-facing end-block, a mid-block, and a south-facing end-block site, each is designed to both current code requirements and the 2°C scenario emission limit. The selection of an urban context bridges the gap between the ideal conditions of rural or campus buildings, where few obstructions to leveraging passive design and implementing extensive on-site renewable energy systems exist, and urban buildings with tight sites and limited passive opportunities. With the world now predominantly urban, these sites are expected to represent the norm. Pablo Picasso saw constraints as sources of inspiration and invention rather than limitations to creativity. Similarly, rather than being a limitation to design, this thesis will show that it has the opportunity to become a foundational design driver motivating invention and innovation within the field’s practical and conceptual foundations.