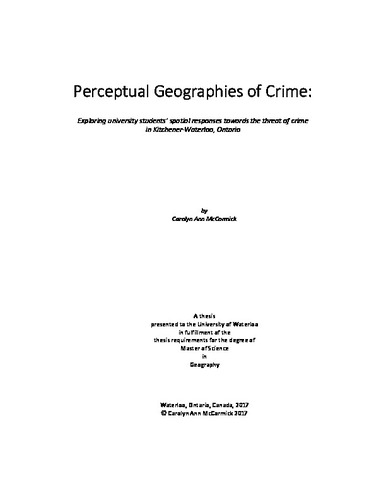 The Waterloo Regional Police Service has identified the post-secondary students in their jurisdiction to be at greater risk to certain crimes than other residents. This study describes how students perceive crime in the cities of Kitchener-Waterloo and gauges gauge their level of crime awareness. The research investigates how crime in the cities of Kitchener-Waterloo, Ontario is perceived by local post-secondary students. A survey was conducted with 51 volunteers. Data was collected using a standardized questionnaire and a semi-structured interview. The interview involved a cognitive mapping exercise, allowing respondents to both orally and visually describe how their perceptions vary across the city. Multiple annotated maps were produced of the study area, thematically summarizing student perceptions of violent and non-violent crime, as well as social and physical disorder. These boundaries were also compared by overlay to police response data of five crime types to evaluate how perceptions aligned with police-recorded indicators. Students feel safe in Kitchener-Waterloo, even though they associate certain areas with higher risks of crime. The presence of disorder corresponded to many perceptions of crime. Students faced particularly strong barriers to trust in the presence of homeless and mentally ill. As well, students understand where crime occurs in the study area but their perceptions may not be attuned to their own risks. Students tend to perceive the threat of crime where disorder is most visible, which is away from campus and places of residence. As such, they may not be informed of the risks that the police have identified. These findings emphasize that perceptions of crime in a city are not aligned to individual risks but can illuminate stigmas that divide communities within cities. An understanding of how crime is perceived can be used by police services and municipalities like Kitchener and Waterloo to guide policy and educational decisions as they continue strive towards building strong community in safe cities.