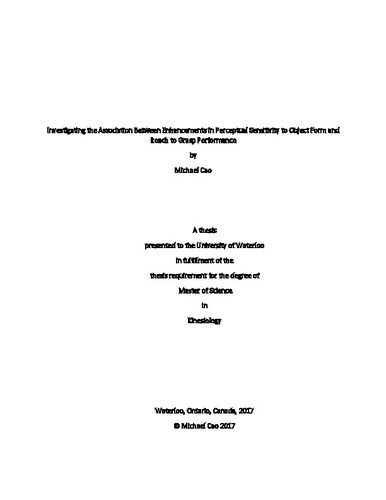 The act of reaching to grasp an object serves as a primary method of interaction with the surrounding environment. Therefore, it is important to understand the association between perceptual sensitivity to object form and the corresponding movement kinematics. As such, the objective of this study was to examine the association between the enhancement in perceptual sensitivity to object form and reach to grasp performance. Thirty visually healthy participants were tested in two experimental tests: a psychophysical test to establish perceptual sensitivity to object form, and a motor task to measure the kinematics of a reach to grasp movement. A method of constant stimuli was used to assess perceptual sensitivity for two shape perception tasks: radial frequency (RF) and motion defined form (MDF). The main outcome measures were the perceptual threshold (i.e., accuracy) and just noticeable difference (JND). The motor task consisted of a reach to grasp task where movement kinematics were quantified using 3 measures: maximum grip aperture (MGA), time in deceleration (TID), and time grasping (TIG). Both perceptual tasks, and the kinematic task were performed during binocular and monocular viewing. It was hypothesised that the magnitude of binocular advantage (i.e., the improvement in performance during binocular compared to monocular viewing) found for the perceptual tasks will be positively associated with a binocular advantage during the reach to grasp task. Results showed a significant binocular advantage for both perceptual tasks, as well as the kinematic measures of the reach to grasp task, which is consistent with previous literature. In contrast to the hypothesis, there were no significant associations between the magnitude of binocular advantage found in the perceptual tasks and reach to grasp performance. These findings indicate that binocular information appears to be processed independently for shape perception and movement execution. This is consistent with the notion of separate ventral and dorsal streams being involved in processing binocular signals for the purpose of perception and action. However, it is important to note that limitations of this study may contribute to the lack of perceptual-reach to grasp association.

Michael Cao (2017). Investigating the Association Between Enhancements in Perceptual Sensitivity to Object Form and Reach to Grasp Performance. UWSpace. http://hdl.handle.net/10012/12697