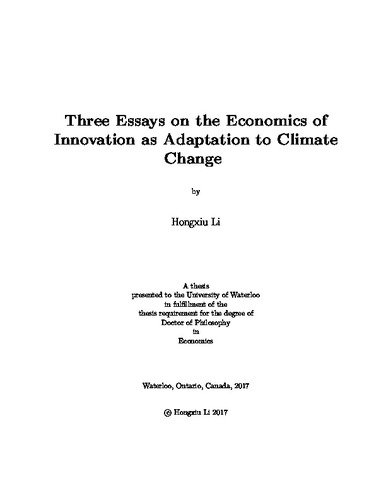 This thesis consists of three chapters on technological innovation as adaptation to climate change. The first chapter adopts a non-cooperative game theory model to investigate the relationship between adaptation technology and the formation of emission-reducing International Environmental Agreements (IEAs) on climate change. The main contribution to the literature consists of considering countries that are heterogeneous with respect to the benefits and costs of both mitigation of emissions and adaptation. While differences in climate vulnerability are a deterrent for cooperation, this chapter shows that increasing the effectiveness of adaptation in highly vulnerable countries can foster an IEA. Both free-riding on climate change mitigation efforts, and free-riding on adaptation technology among members of an IEA can be reduced by the transfer of adaptation technology within the IEA. A numerical example with parameters estimated from climate change data is employed to simulate stable coalitions and demonstrate how the transfer of adaptation technology reduces free-riding on an IEA. The second chapter examines the determinants of adaptive innovation aimed at reducing the impact of natural disasters, which are expected to intensify with climate change. Starting from a conceptual model combining perceived risk theory with innovators' profit motive, this study investigates the salience of innovation induced by natural disasters, using a unique dataset that includes related U.S. patent data, and flood, drought, and earthquake damage data for the years 1977 to 2005. To address the potential endogeneity of disaster damage, the control function approach is employed with instrumental variables constructed from disaster intensity measurements. The results show that impact-reducing innovations at the state level respond to national disaster damages in the U.S. In general, the impact of natural disasters is not localized to a state--that is, disaster damage in a state also stimulates innovations in more-distant states. This is in contrast with comparable existing cross-country evidence. The findings in this paper highlight a policy role for the federal government in more effectively spurring impact-reducing innovations nationwide. With the pressure of economic growth and the impact of climate change, water issues such as water shortage and pollution have substantial impacts on welfare and sustainability. Taking a view of innovation as adaptation to intensified water threats, the third chapter explores the impact of federal and state level regulatory changes with respect to drinking water quality, water pollution and water quantity in the U.S. on the level of relevant technological innovation. Based on a detailed review of relevant legislative acts, a unique dataset covering major amendments and additions to regulated contaminants lists is constructed to capture the changes of water governance in the U.S. in the past 30 years. In addition, technological patents pertaining to water quality and quantity are identified through a comprehensive search process. The empirical results show the impact of water regulations on innovation to be both statistically and economically significant.