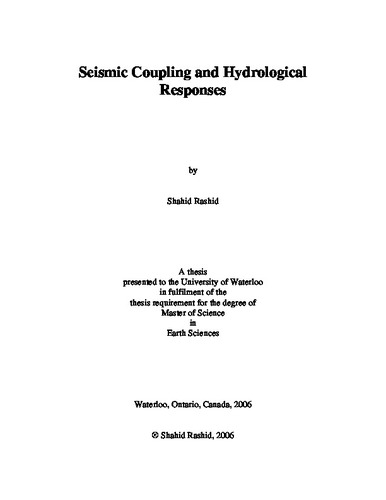 In seismology, the capability of an earthquake to induce other seismic events has been widely accepted for decades. For example, the term aftershock involves a strong relation of such a seismic event with the incidence of a main shock. Moreover, hydrological changes (water level in wells and streams, geyser eruption and remote seismicity) in response to remote earthquakes have been reported for many years. A matter of current debate concerns the spatiotemporal scale of interaction among seismic events. However, there appears to be no clear image of what is the exact method of transmission of the triggering energy for the phenomena listed above. It appears that the P-wave and the S-wave are inadequate in terms of ground strain magnitudes at teleseismic distances, while the amplitude of the surface waves generally decreases exponentially with depth in the Earth and could not be responsible for triggering deeper earthquakes or deep-seated fluid flow fluxes in 3-5 km deep reservoirs. This leaves some other wave as a possible triggering energy sources. <br /><br /> This thesis is based on a diffusion-dynamic theory that predicts a low velocity displacement wave, called a soliton wave, propagating in liquid-saturated porous media with velocity ~100-300 m/s, analogous to a tsunami that travels with the loss of little energy. This is hypothesized to be the mechanism for energy transfer that could be sufficient to promote changes in local pore pressure and therefore to alter the ambient effective stresses. It is also hypothesized that a soliton wave packet is emitted by a primary seismic event and may trigger sympathetic secondary earthquakes at a remote distance, fluid level fluctuation in wells, changes in geyser eruption behaviour, and changes in microseismic frequency, amplitude and patterns in appropriate places (e. g. under water reservoirs, in areas of active hydrothermalism, in tectonically active areas, and so on). <br /><br /> This thesis undertakes a review of some of these phenomena, and finds that the evidence as to what is the triggering mechanism is not clear. Also, it appears that the soliton hypothesis is not at all disproved by the data, and there may be some evidence of its existence. <br /><br /> To reveal the evidence of this kind of wave (soliton) in nature, real sequence and K-Q cases velocity data bases of earthquake interactions in the year of 2003 have been constructed by using information from Incorporated Seismological Research Institute (IRIS). The qualitative and quantitative analysis demonstrates that interactions between seismological and hydrological systems due to soliton waves are a definite possibility. However, the growth of fluid fluxes, geysers eruption and remote seismicity are controlled by both the principal stresses and the pore pressure. Hence, this interaction depends on the hydromechanical properties of rock such as permeability, compressibilities, and viscosities of fluids, saturations, and porosity. Perhaps the strongest argument in favour of a low-velocity soliton trigger is that the other seismic waves seem to be inadequate, and there is no evidence for their actions as a trigger. <br /><br /> The practice of detection and analysis of a soliton is not undertaken in this work. Because current devices are incapable to measure such a wave as they are on the surface and insensitive to liquid-solid coupling, sensitive and precise sensors in the low frequency range must be installed within the liquid saturated zone, preferably under the water table, to advance further work.