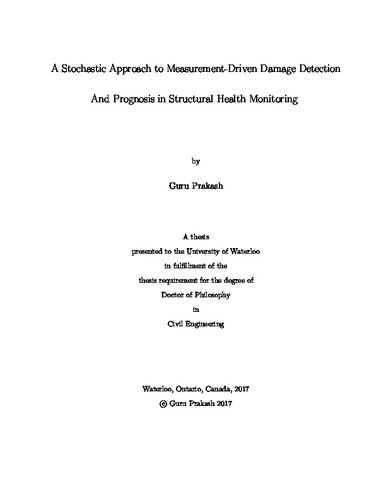 Damage detection and prognosis are integral to asset management of critical mechanical and civil engineering infrastructure. In practice, these two aspects are often decoupled, where the former is carried out independently using sensor data (e.g., vibrations), while the latter is undertaken based on reliability principles using life time failure data of the system or the component of interest. Only in a few studies damage detection results are extended to remaining useful life estimation, which is achieved by modeling the underlying degradation process using a surrogate measure of degradation. However, an integrated framework which undertakes damage detection, prognosis, and maintenance planning in a systematic way is lacking in the literature. Furthermore, the parameters of degradation model which are utilized for prognosis are often solely estimated using the degradation data obtained from the monitored unit, which represents the degradation of a specific unit, but ignores the general population trend. The main objectives of this thesis are three-fold: first, a mathematical framework using surrogate measure of degradation is developed to undertake the damage detection and prognosis in a single framework; next, the prior knowledge obtained from the historical failed units are integrated in model parameter estimation and residual useful life (RUL) updating of a monitored unit using a Bayesian approach; finally, the proposed degradation modeling framework is applied for maintenance planning of civil and industrial systems, specifically, for reinforced concrete beams and rolling element bearings. The initiation of a fault in these applications is often followed by a sudden change in the degradation path. The location of a change-point can be associated with a sudden loss of stiffness in the case of structural members, or fault initiation in the case of bearings. Hence, in this thesis, the task of change point location identification is thought of as being synonymous with damage or fault detection in the context of structural health monitoring. Furthermore, the change point results are used for two-phase degradation modeling, future degradation level prediction and subsequent RUL estimation. The model parameters are updated using a Bayesian approach, which systematically integrates the prior knowledge obtained from historical failure-time data with monitored data obtained from an in-situ unit. Once such a model is established, it is projected to a failure threshold, thereby allowing for RUL estimation and maintenance planning. Results from the numerical as well as actual field data shows that the proposed degradation modeling framework is good in performing these two tasks. It was also found that as more degradation data is utilized from the monitoring unit, the progressing fault is detected in a timely manner and the model parameters estimates and the end life predictions become more accurate.