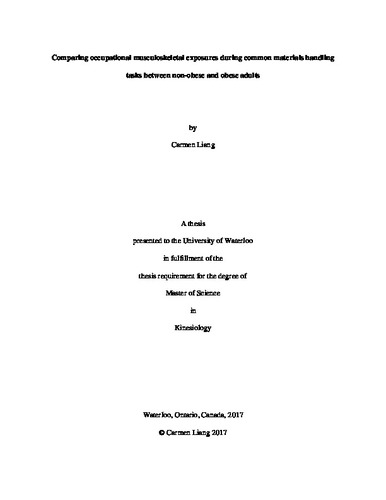 Higher body mass is associated with increased risk of musculoskeletal injury, a greater number of insurance claims, and higher direct and indirect costs due to decreased productivity during manual materials handling. Over one billion adults are overweight and at least 400 million are obese worldwide. Obese individuals may experience higher musculoskeletal exposures during work performance due to excess body mass. With greater segmental masses and higher distance of these masses from joint centers of rotation, larger joint moments could be generated for obese persons in similar postures to non-obese persons. This consequently would make tasks that require farther reaches relatively more demanding for obese persons. It is crucial to assess this potentially vulnerable cohort to reduce risk of musculoskeletal injuries during manual materials handling (MMH) tasks, particularly as many current workspace designs are based on normal weight anthropometric charateristics. The purpose of this research was to determine differences in joint loading and modified motion patterns between non-obese (normal weight & overweight) and obese adults during common manual materials handling tasks. Thirty participants (15 male & 15 female) performed the following four manual materials handling tasks: load transfer (0.5kg, 1.5kg, 2.5kg), lift & lower (2.5kg, 5kg, 10kg), push (40N, 60N, 80N), and pull (40N, 60N, 80N). Upper extremity kinematics were collected during the four MMH tasks with 29 reflective markers. Joint kinematic profiles of amplitude probabilty distribution functions (APDF) were created for the low back, shoulder, and elbow, while joint moments of APDF were created for the low back, shoulder, elbow, and wrist. Isometric and maximal functional strength tests evaluated low back and shoulder strength. Worktables and handle heights were adjusted to each participant according to NIOSH and Liberty Mutual Table recommendations. Participants were categorized into two groups: those obese with BMI>30kg/m2 or non-obese with BMI≤30kg/m2. Body discomfort and exertion were recorded for each task combination. Statistical comparisons between the obese and non-obese individuals were performed for isometric and maximal functional strength tests, kinematic and kinetic profiles for APDFs. Results showed that obese individuals have higher absolute strength unless normalized to body mass, and they experiece higher moments at the low back and shoulder for specific task parameters. On average, obese individuals had greater absolute strength for isometric tests, low back flexion (495N), low back extension (453N), shoulder flexion (86N), shoulder internal rotation (128N), and for maximal functional strength tests push (216N) and down (148N) exertions. Absolute isometric joint and maximal functional strength had positve corrleations with increases in BMI. When strenght tests were normalized to body mass, there was a negative correlation with increase in BMI. Interactions between distance and groups during the 90th percentile level of exposures resulted in increases to low back resultant moments by 39% at the 30cm reach, 31% at 50cm, and 21% at 70cm reach during the load transfer task compared to the non-obese group. Lift combinations from knuckle to shoulder (KS) resulted in higher low back moments with hand loads of 2.5kg and 10kg by 20%, 5kg and 10kg increased by 29%, and 2.5kg and 5kg increased by 43% for obese participants. Height combinations of floor to shoulder (FS) resulted in higher low back moments with hand loads of 2.5kg and 5kg by 25%, 5kg and 10kg by 27%, and 2.5kg and 5kg by 46% for obese participants when compared to the non-obese group. Interactions between distance and groups for shoulder moments were higher at exposure levels of 90th percentile where height combination of FK, KS and FS were greater by 30%, 19%, and 21% respectively, for obese participants when compared to the non-obese group. Obese individuals experienced more exertion when executing the push and pull tasks, but did not exemplify significant differences from the non-obese groups. Future recommendations for manual materials handling tasks for obese individuals, particularly for the upper extremity during load transfer tasks, should consider closer work distances and lighter hand loads. This would minimize low back and shoulder moments as they were higher compared to non-obese individuals for all distance and load combinations. To minimize the amount of work performed, lifts requiring floor-to-shoulder heights should have lighter hand loads to minimize high exposures. Workspaces should allow individuals to move freely as movement compensations may occur to potentially avoid overload at certain joints or segments.