Natural Disasters and the Crusades: Framing Earthquakes in Historical Narratives, 1095-1170 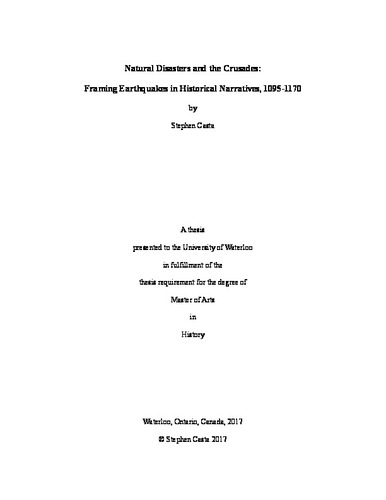 This thesis explores perceptions of earthquake causality in the accounts of twelfth-century Syria and the ways that medieval views of natural disasters influenced historical writing. Examining the perceived causes, effects, and significance of cataclysmic seismic events provides insight into shared elements of faith perspectives, the role of nature in medieval worldviews, and how chroniclers framed accounts of natural disasters to reflect their religious and political prejudices. Medieval writers believed that natural phenomena were indicative of important world events and imbued with spiritual significance. Chroniclers perceived earthquakes as omens of future disaster or the apocalypse, and associated them with a need for repentance due to their belief that seismic disasters were divine punishment for moral failings. In addition, Christian and Muslim sources utilized these perceptions on divine causality to criticize the failings of political leaders and rival religious communities. These patterns of portrayal possess great significance in the context of the major conflicts and cultural convergences in the twelfth-century Near East. In addition to the theological perspectives and political criticism present in the sources, terrestrial and astrological explanations for earthquakes were prevalent in the twelfth century and often used to complement, not disprove, perceptions of divine causation. Apocalyptic sentiment and crusading spirituality also influenced portrayals of earthquakes, particularly in the Christian sources. These intellectual patterns are evident in earthquake accounts from the period irrespective of religious and cultural differences, but were firmly grounded in the political realities of the Levant during the Crusades. The sources’ methods of portraying seismic disasters, therefore, provide important insight into the worldviews of medieval chroniclers and the broad effects of earthquakes amidst the complex dynamics of twelfth-century Syria.