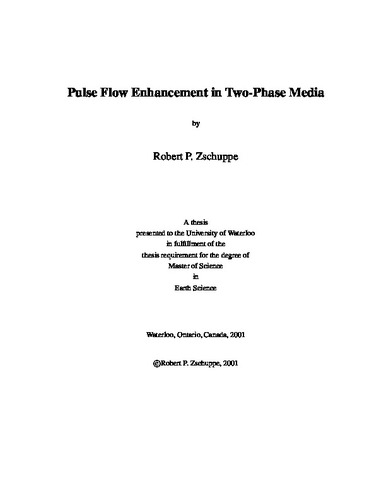 This laboratory project has been done to evaluate pressure pulsing as an Enhanced Oil Recovery (EOR) technique. To perform the study, a consistent laboratory methodology was developed, including the construction of a Consistent Pulsing Source (CPS). Tests compared pulsed and non-pulsed waterfloods in a paraffin or crude oil saturated medium, which also contained connate water (an irreducible water saturation). Results revealed that pulsed tests had maximum flow rates 2. 5--3 times higher, greater oil recovery rates, and final sweep efficiencies that were more than 10% greater than non-pulsed tests. The CPS design has proven very successful, and has since been copied by a major oil corporation. However, there are two limitations, both caused by fluctuating water reservoir levels. Longer pulsed tests (reservoir-depletion tests) were periodically paused to refill the water reservoir, resulting in reservoir depressurization and lower flow rates. The final effect of this was impossible to quantify without correcting the problem. The second CPS limitation was the change in pulse shape with time. However, it is not expected that this had any major effect on the results. The pulse pressure and period studies were limited by early tests, which did not have the necessary time duration. Both increasing pulse pressure and decreasing pulse period were found to increase the final sweep efficiency. Slightly decreasing porosity (0. 4% lower) was found to lower sweep efficiencies. However, the 34. 9% porosity results were not done until reservoir depletion, so it is difficult to quantitatively compare results. An emulsion appeared after water breakthrough when using the CPS on light oils (mineral oil). This may have been the result of isolated oil ganglia being torn apart by the sharp pulses. Although it is difficult to apply laboratory results to the field, this study indicates that pressure pulsing as an EOR technique would be beneficial. Doubled or tripled oil recovery rates and 10% more oil recovery than waterflooding would be significant numbers in a field operation. A valuable application would be in pulsing excitation wells to both pressurize the reservoir and enhance the conformance of the displacing fluid over a long-term period. It would also be valuable for short-term chemical injections, where mixing with the largest volume possible is desirable.