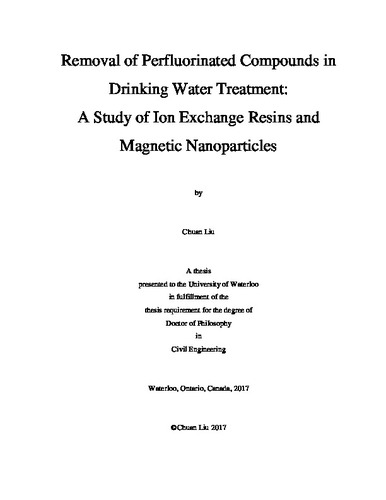 Perfluorinated compounds (PFCs) are emerging contaminants which have been detected in various environmental compartments, including drinking water sources. Because of their potential risks to human health, PFCs in drinking water systems have been studied at an increasing rate in recent years. Among all the PFCs, perfluoroalkyl carboxylic acids (PFCAs) and perfluoralkyl sulfonic acids (PFSAs) are two common classes; while perfluorinated phosphonic acids (PFPAs) are a type of PFCs, which have only been detected in the environment in the past few years. As the two most commonly detected PFCs, perfluorooctanoic acid (PFOA) and perfluorooctanoic sulfonate (PFOS) have been included in USEPA’s fourth Contaminant Candidate List (CCL4) recently. In terms of treatment, ion exchange batch studies showed promising results for PFC removal. Nanoparticles are novel and promising adsorbents due to their high specific surface areas and other properties. The overall objective of this study is to investigate more efficient approaches to remove PFCs by ion exchange and adsorption processes in drinking water systems, including the application of anion exchange resins and nanoparticles, studying the influence of PFC characteristics on these processes, and the impact of water qualities, especially the effects of natural organic matter (NOM) and inorganic anions. A liquid chromatography tandem mass spectrometry (LC-MS/MS) method was adapted for analyzing seven PFCAs, three PFSAs, and three PFPAs in water samples. Solid phase extraction (SPE) was applied to concentrate water samples and to reach lower detection limits. Both the LC parameters and the multiple reaction monitoring (MRM) conditions of the MS/MS were optimized to reach short retention times, good sensitivity, and nice peak shapes for the selected PFCs. The method detection limits (MDLs) for PFCAs and PFSAs ranged from 0.1 to 1.0 ng/L, while the MDLs for PFPAs were 5.0 to 5.1 ng/L. Four PFCAs and three PFSAs were then selected as target PFCs in subsequent removal studies. Five commercially available anion exchange resins with different properties were chosen to test their PFCs removals in both ultrapure and Grand River water in batch studies. In ultrapure water, all resins had high removals of over 80% for all target PFCs. In Grand River water, all resins had decreased PFC removals though they varied with different types of PFCs. PFSAs had higher removals than PFCAs and short chain PFCs were less removed than long chain PFCs. Based on these results, TAN-1 and PFA444 were selected as target resins to study single compound isotherms in ultrapure water, PFC removal in Lake Erie water, and the effect of inorganic anions. These studies proved that the decrease of PFC removals in surface water was caused by competition from both NOM and inorganic anions. The existence of sulfate in water could decrease PFCs removal, especially short chain PFCAs. Based on the PFC results above, TAN-1, PFA444 and A555 were selected as target anion exchange resins for regeneration batch studies. Regeneration conditions for selected anion exchange resins including regenerant types, cation types, and solvent types were tested in batch studies. The use of higher concentration of the regenerant salts, Na+ ions, and methanol can enhance the PFCs regeneration performance. Short chain PFCs had higher regeneration rates than long chain PFCs, and PFCAs had better regeneration performance compared to PFSAs. A555 had the best regeneration performance among the three selected resins; thus it was chosen as target resin for column tests. In the column regeneration tests, the regeneration conditions of 5% NaCl and 10 ml/min flow rate had the best regeneration performance. In the anion exchange column experiment using Grand River water, the breakthrough of all PFCs gradually increased from 20% after 100000 BV, to 90% breakthrough after 220000 BV. Magnetic nanoparticles with three different modified polymers were designed for PFC removal and synthesized. They were applied in PFC removal kinetic experiments in both ultrapure water and Grand River water. All magnetic nanoparticles achieved short equilibrium times of less than 10 hours in both waters. Magnetic nanoparticles modified with polymer p-DADMAC (N1) had the best PFC removal among all three nanoparticles in both waters. In Grand River water, the PFC removal of all three nanoparticles decreased substantially. NOM rather than inorganic anions was shown to be the main competitor for PFC removal by nanoparticles in surface water. The approach of using synthesized magnetic nanoparticles has potential to remove PFCs and should be further pursued.