Chlorine, Fluorine and Water in the Stratosphere: Chemistry, Transport and Trends based on ACE-FTS measurements 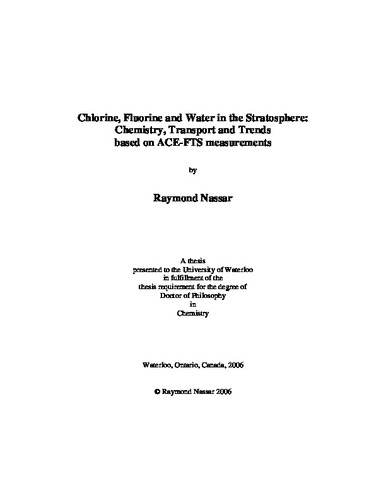 The Atmospheric Chemistry Experiment (ACE) is a satellite mission for remote sensing of the Earth's atmosphere using the solar occultation technique. The primary instrument on this satellite is the Atmospheric Chemistry Experiment Fourier Transform Spectrometer (ACE-FTS). ACE-FTS retrievals are described with a focus on the creation of <em>a priori</em> temperature and pressure profiles. ACE-FTS measurements are then used to investigate the chemistry, transport and trends of chlorine, fluorine and water in the stratosphere, leading to an improved understanding of processes affecting both stratospheric ozone depletion and global climate change. <br /><br /> Total chlorine (Cl<sub>TOT</sub>) in the stratosphere is determined using ACE-FTS measurements of eleven chlorine-containing species, supplemented by both other measurements and models, to determine Cl<sub>TOT</sub> as a function of altitude in five latitude zones. All resulting Cl<sub>TOT</sub> profiles are nearly linear, with a slight slope. Mean Cl<sub>TOT</sub> for 2004 is determined to be 3. 65 ppbv for both the northern and southern midlatitudes (with a precision and estimated accuracy of ±0. 09 and ±0. 13 ppbv, respectively). A slightly lower value of mean Cl<sub>TOT</sub> is determined for the tropics and slightly higher values at high latitudes. Total fluorine (F<sub>TOT</sub>) in the stratosphere is also determined primarily from ACE-FTS measurements using a similar approach, resulting in stratospheric F<sub>TOT</sub> profiles which are nearly linear with mean values ranging from 2. 50 to 2. 59 ppbv for each latitude zone (with a precision of 0. 04-0. 07 ppbv and an estimated accuracy of 0. 15 ppbv). The observed slopes and pattern of latitudinal variation are evidence of the beginning of a decline in global stratospheric chlorine and of the continuing increase in global stratospheric fluorine levels. <br /><br /> The abundance of water in the stratosphere is investigated for the northern hemisphere midlatitudes in 2004 using ACE-FTS measurements. Potential water is determined as [H<sub>2</sub>O]+2[CH<sub>4</sub>] and from [H<sub>2</sub>O] versus [CH<sub>4</sub>] correlations, resulting in a value of 7. 14±0. 05 ppmv, which is used to determine a value of 3. 65±0. 15 ppmv for the mean abundance of water entering the stratosphere. Both values are compared directly with historical data from the Atmospheric Trace Molecule Spectroscopy (ATMOS) instrument (1985-1994) and show a negligible change, implying that the increases observed by ATMOS and other long-term measurements from that time period have not continued. <br /><br /> The removal of stratospheric water in the Arctic vortex is investigated using ACE-FTS measurements. Using derived quantities from a meteorological data assimilation, northern hemisphere occultations from early 2004 are classified as vortex, vortex edge or extravortex. [CH<sub>4</sub>] versus [N<sub>2</sub>O] correlations are used to further classify the extravortex occultations as tropical, subtropical or midlatitude. Comparisons between profiles of [N<sub>2</sub>O], [CH<sub>4</sub>] and [H<sub>2</sub>O] inside and outside the Arctic vortex, give estimates of upper stratospheric and lower mesospheric descent rates, indicating that descent in the winter 2004 Arctic vortex was rapid, with evidence of descent at higher altitudes than in past years. <br /><br /> The dehydration of air in the tropical tropopause layer and mechanisms for the entry of water vapor into the stratosphere are investigated by an analysis of ACE-FTS profiles of temperature, water vapor and [HDO]/[H<sub>2</sub>O]. Month-to-month comparisons for 2004 and 2005 reveal a clear pattern of seasonal variation and a correlation between minimum temperature and maximum HDO depletion. Further interpretation indicates that the gradual dehydration mechanism accompanied by lofting of ice particles in the tropical troposphere is the most likely explanation for the observed seasonal variation and the shape of the [HDO]/[H<sub>2</sub>O] profiles.

Raymond Nassar (2006). Chlorine, Fluorine and Water in the Stratosphere: Chemistry, Transport and Trends based on ACE-FTS measurements. UWSpace. http://hdl.handle.net/10012/1266