Focusing on Values and Ideals Decreased P3a Amplitude: A Confirmation of the Joint Subsystems Hypothesis 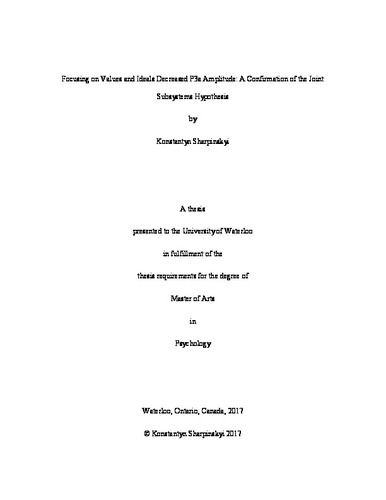 Approach - avoidance dichotomy can be found in most of the major psychological theories concerned with motivation (Elliot, 1999). However, to date little is known about the effects that the underlying systems have on each other. The joint subsystems hypothesis (JSH), derived from Reinforcement Sensitivity Theory, proposes that under most circumstances the approach (Behavioural Activation System; BAS) and avoidance (Behavioural Inhibition System; BIS) systems behave in a mutually antagonistic fashion (Corr, 2004). To test this hypothesis, I manipulated state BAS by having participants reflect on their ideals (Study 1; n = 65) and core values (Study 2; n = 62). To measure state BIS, I recorded participants’ electroencephalogram in response to white noise and pure tones from which P3a amplitude was extracted, a BIS related event-related potential. Reflecting on ideals and core values reduced P3a amplitude, as predicted by the JSH. Results are discussed in the context of the general threat and defense framework (Jonas et al., 2014).