Examining Autophagy and Mitophagy as Inducible Mechanisms of Cellular Remodelling 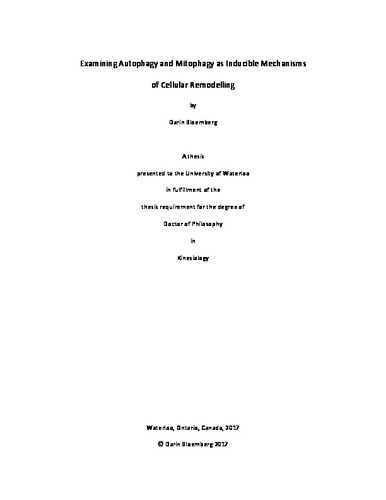 Despite an explosion of knowledge regarding the molecular regulation of autophagy since its initial characterization in yeast in the 1990s (including the 2016 Nobel Prize in Physiology or Medicine for Dr Yoshinori Ohsumi), essential questions concerning its biological relevance are unanswered. Importantly, given autophagy’s logical links to the beneficial health effects of relative caloric restriction and exercise, progress is being made towards developing autophagy-inducing drugs intended to generally benefit human health. Although many candidates appear to have such effects in model organisms and are well-tolerated by humans, it remains unclear whether these effects are due to autophagy specifically, as direct autophagy-inducing chemicals have not yet been publicly identified. This lack of precise autophagy-targeting chemicals amplifies and confounds the fact that the biological and physiological impacts of specific autophagy induction are relatively unexplored. Here, several basic cellular effects resulting from autophagy induction by amino acid starvation or rapamycin (mTOR inhibitor) as well as mitophagy induction by CCCP (depolarizes mitochondrial membranes) were examined. These effects were investigated in Atg7-knockdown C2C12 cells (considered to be autophagy-deficient) and those with Bnip3-knockout. First, previous research has examined the relationship between autophagy and senescence caused by various stimuli; results have shown that autophagy promotes and attenuates senescence, depending on the study. Although, whether autophagy induction itself causes senescence has not been examined. We demonstrate that repeated administration of C2C12 cells with low staurosporine (STS) doses causes senescence characterized by G1 cell cycle arrest, enlarged cell and nuclei size, increased senescence-associated heterochromatic foci (SAHF), increased senescence-associated acid b–galactosidase activity (SA-Bgal), and myogenic differentiation impairment. However, none of these cellular features occurred in cells repeatedly incubated in amino acid and serum free media (HBSS), which massively induced autophagy. Additionally, while senescent cells were protected from cell death caused by the DNA damaging agent cisplatin, HBSS-treated cells were not. When Atg7-deficient cells were intermittently given low dose STS, senescence did not occur, likely due to the vastly decreased ability to actually survive without functional autophagy. Therefore, Chapter II demonstrates that although autophagic activity is implicated in senescence development, massive sub-lethal autophagy induction itself does not cause senescence. Next, we wanted to further examine autophagy-induced stress resistance development, as some protection from STS-induced cell death was observed in HBSS-treated cells in Chapter II. To do this, normal and Atg7-deficient cells were intermittently incubated in amino acid free media or rapamycin to induce autophagy, and the sensitivity to cell death caused by STS, cisplatin, or hydrogen peroxide was examined. Results indicated that prior repeated amino acid withdrawal protected cells from STS-induced cell death, and this required Atg7. This effect was likely due to reduced mitochondrial-mediated caspase activation, as caspase-9 activity was significantly lower in amino acid starved cells and administering a chemical inhibitor of caspase-3 could mimic the protective effect. Surprisingly, not only were rapamycin-treated cells not similarly protected, but they displayed increased sensitivity to cell death induced by hydrogen peroxide and cisplatin in an Atg7-independent manner. These cells were additionally characterized by greatly enlarged cell size, altered cell cycle profiles, and completely prevented myogenic differentiation. Therefore, Chapter III demonstrates autophagy’s potential as a cellular remodelling mechanism that causes context-dependent stress resistance, and highlights the significant differences between metabolic stimulation of autophagy and that caused by mTOR inhibition. Lastly, to investigate the relevance of mitophagy and mitochondria-specific mechanisms in mediating this observed autophagy-induced stress resistant phenotype, similar experiments were performed to compare the effects caused by intermittently incubating cells in HBSS or CCCP. Although CCCP treatments did not protect from STS-induced cell death to the same extent as HBSS, both treatments attenuated calcium-induced mitochondrial membrane depolarization and permeability pore formation. In fact, this protection was abrogated in Atg7-deficient cells, demonstrating that autophagy is required for this adaptation. Further examination into mitochondrial function showed that previous intermittent amino acid starvation increased maximal ADP-stimulated cellular oxygen consumption when provided with complex-I and/or complex-II substrates. Additionally, not only was mitochondrial respiration significantly impaired in Atg7-deficient cells, but amino acid starvation did not increase oxygen consumption without Atg7. By generating Bnip3-deficient cells with CRISPR/Cas9, it was also shown that Bnip3 is dispensable for repeated amino acid starvation to cause resistance to STS-induced cell death and to increase maximal mitochondrial respiration. Therefore, Chapter IV demonstrates that specific amino acid starvation-induced autophagy causes mitochondrial remodelling resulting in increased stress resistance and function, and furthermore that Bnip3 may have a redundant role in this regard.