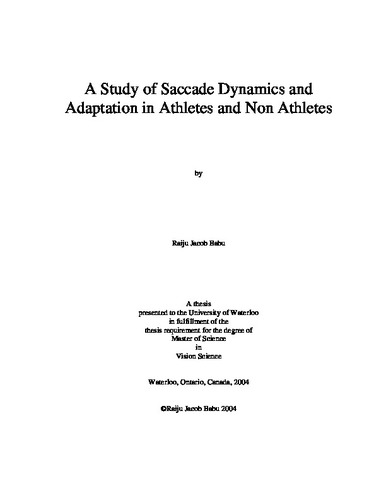 Purpose: The aim of the study was to delineate differences in saccade characteristics between a population of athletes and non athletes. Aspects specifically investigated were latency, accuracy, peak velocity, and gain adaptation of saccades using both increasing and decreasing paradigms. Methods: A sample of 28 athletes (varsity badminton and squash players) and 18 non athletes (< 3 hour/week in sports) were studied. Eye movements were recorded at 120Hz using a video based eye tracker (ELMAR 2020). Each subject participated in 2 sessions on separate days. Baseline saccade responses to dot stimuli were measured in both sessions (stimulus size: 5-25 deg). The first session involved a gain decreasing paradigm, induced by displacing the stimulus backwards by 3 degrees from the initial target step (12 deg) for 500 trials. In the 2nd session a gain increase was induced by displacing the stimuli by 3 degrees in the forward direction. The latency and accuracy were calculated from the baseline. The asymptotic peak velocity was calculated from the main sequence (amplitude vs. peak velocity). The amplitude gains, calculated from the adaptation phase, were averaged for every 100 saccade responses. The averaged gains were normalized with respect to the baseline, fitted with a 3rd order polynomial, and differentiated to obtain the rate of change. Differences between the groups were compared using a regression analysis. Results: There were no significant differences in latency, accuracy, and asymptotic peak velocity between athletes and non athletes. No significant differences were seen between the two groups in the magnitude of saccadic adaptation, both for decreasing (- 15% in both groups) and increasing (athletes + 7% and non athletes + 5%) paradigms. However, athletes showed a significantly faster rate of adaptation for the gain increasing paradigm (F = 17. 96[3,6]; p = 0. 002). A significant difference was not observed in the rate of adaptation for the gain decreasing adaptation (F = 0. 856[3,6]; p = 0. 512). Conclusions: The study showed that the athletes do not respond better in terms of reaction time or accuracy of saccades. The significant difference in the rate of change of adaptation between the groups shows that online modification of saccades in the positive direction, although not greater in magnitude, occurs quicker in athletes than non athletes.