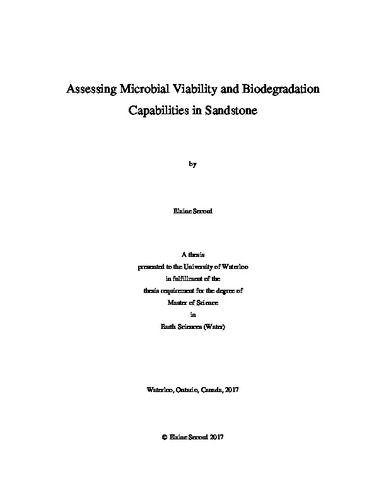 Environmental practitioners have demonstrated enhanced in situ bioremediation (EISB) in homogeneous unconsolidated soils to remediate chlorinated solvents. However, EISB has not been fully investigated in bedrock environments. In addition, there is limited research in the literature that has evaluated bacteria viability in the primary porosity of bedrock for the purpose of reductive dechlorination in the low permeability units of bedrock. Studies that involve bacterial transport in low permeability geological material are typically limited by slow diffusion rates. In this thesis, electrokinetics (EK) was used to overcome slow diffusion rates, and limited bacteria-contaminant-electron donor interactions, by increasing the hydraulic conductivity within the sandstone, in a paired EK-bioaugmentation (EK-Bio) experiment. Idaho Gray andstone cores were artificially contaminated with the aqueous solvent, trichloroethene (TCE), and KB-1 bacteria, a commercially available reductive dechlorinating bacterial consortium, were transported into the cores to assess the ability of bacteria to reductively dechlorinate the solvent. Three goals were outlined to address the main objectives of bacteria viability assessment and dechlorination capabilities: 1) Develop an apparatus at the bench-scale to test EK in bedrock; 2) Determine if amendments could be transported through the primary porosity of bedrock using EK; and 3) Evaluate whether dechlorination of TCE could be promoted in bedrock following the addition of amendments using EK. Four columns were treated with EK to deliver and continuously saturate the cores with TCE contaminant, KB-1 bacteria, and lactate electron donor for about ten days. One core was immediately sampled (baseline), one core incubated for five weeks, and two replicate cores incubated for nine weeks in an anaerobic environment. Results showed that as incubation time increased, vcrA and bvcA reductase gene concentrations increased and fermentation products were metabolized. Although chlorinated ethene concentrations were below detection in the long term incubated cores, dechlorination of TCE was not explicitly observed, as complete mass balance could not be achieved. EK transport was an effective tool to migrate amendments into Idaho Gray sandstone and KB-1 bacteria could thrive within the primary porosity of the sandstone.