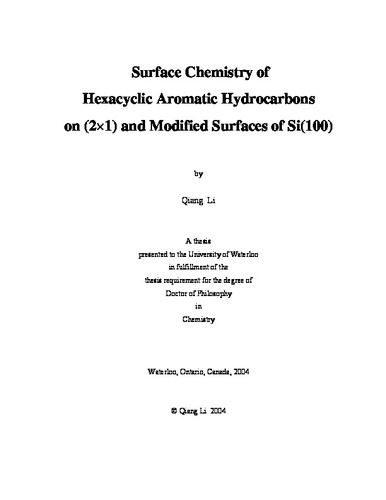 Room-temperature chemisorption of hexacyclic aromatic hydrocarbons on the 2x1, sputtered, oxidized and H-terminated Si(100) surfaces, as well as those upon post treatments of hydrogenation, oxidization and electron irradiation have been investigated by using thermal desorption spectrometry (TDS), Auger electron spectroscopy (AES) and low energy electron diffraction (LEED). This work focuses on the effects of the functional groups (phenyl, methyl, vinyl, heteroatom, and H atom) in the chemisorbed aromatic hydrocarbons (benzene, toluene, xylene isomers, styrene and pyridine) on organic functionalization of the Si(100) surface, particularly on such surface processes as cycloaddition, dative adsorption, hydrogen abstraction, desorption, dissociation, diffusion, and condensation polymerization. Unlike the earlier notion that hydrogen evolution in the hydrocarbon/Si(100) systems is the result of hydrocarbon dissociation (into smaller hydrocarbon fragments and H atoms) on the surface, condensation polymerization of the adsorbed aromatic hydrocarbons is proposed in the present work, in order to explain the higher-temperature hydrogen evolution feature in the toluene/Si(100) system. This hypothesis is supported by our TDS results for other hydrocarbon adsorbates, especially in the pyridine/Si(100) system where electron-induced condensation polymerization has been observed at room temperature. The improved techniques in the TDS experiments developed in the present work have enabled us to observe condensation polymerization and the effect of H on the surface processes (via surface reconstruction) on Si(100) for the first time. New analysis methods have also been developed to determine the adsorption coverage from the AES data, and this work has not only improved the accuracy of the elemental-coverage evaluation, but also provided a means to estimate the rate and the order of chemisorption. By using the density functional theory with the Gaussian 98 program, the adsorption geometries and the corresponding adsorption energies of various adsorption phases have been calculated. These computational results have provided useful insights into the chemisorption structures on the Si(100) surface. The present work also presents the development of three kinetics models for hydrogen evolution in the aforementioned aromatic-hydrocarbon systems on Si(100). Based on a modified collision theory with consideration of diffusion, these theoretical models have proven to be quite successful in simulating the observed TDS profiles and in estimating the kinetic parameters for the analysis of condensation polymerization in 2-dimensional diffusion systems. The present work illustrates that TDS experiments can be used effectively with quantum computation and theoretical kinetics modelling to elucidate the intricate nature of organosilicon surface chemistry.