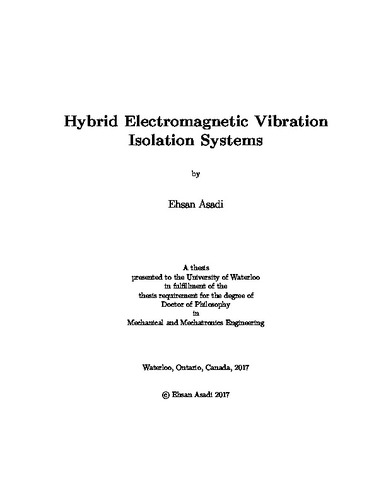 Traditionally, dynamic systems are equipped with passive technologies like viscous shock absorbers and rubber vibration isolators to attenuate disturbances. Passive elements are cost effective, simple to manufacture, and have a long life span. However, the dynamic characteristics of passive devices are fixed and tuned for a set of inputs or system conditions. Thus in many applications when variation of input or system conditions is present, sub-optimal performance is realized. The other fundamental flaw associated with passive devices is that they expel the undesired kinetic energy as heat. Recently, the introduction of electromagnetic technologies to the vibration isolation systems has provided researchers with new opportunities for realizing active/semi-active vibration isolation systems with the additional benefit of energy regeneration (in semi-active mode). Electromagnetic vibration isolators are often suffer from a couple of shortcomings that precludes their implementations in many applications. Examples of these short comings include bulky designs, low force density, high energy consumption (in active mode), and fail-safe operation problem. This PhD research aims at developing optimal hybrid-electromagnetic vibration isolation systems to provide active/semi-active and regenerative vibration isolation for various applications. The idea is to overcome the aforementioned shortcomings by integrating electromagnetic actuators, conventional damping technologies, and stiffness elements into single hybrid packages. In this research, for both semi-active and active cases, hybrid electromagnetic solutions are proposed. In the first step of this study, the concept of semi-active hybrid damper is proposed and experimentally tested that is composed of a passive hydraulic and a semi-active electromagnetic components. The hydraulic medium provides a bias and fail-safe damping force while the electromagnetic component adds adaptability and energy regeneration to the hybrid design. Based on the modeling and optimization studies, presented in this work, an extended analysis of the electromagnetic damping component of the hybrid damper is presented which can serve as potent tool for the designers who seek maximizing the adaptability (and regeneration capacity) of the hybrid damper. The experimental results (from the optimized design) show that the damper is able to produce damping coefficients of 1300 and 0-238 Ns/m through the viscous and electromagnetic components, respectively. In particular, the concept of hybrid damping for the application of vehicle suspension system is studied. It is shown that the whole suspension system can be adjusted such that the implementation of the hybrid damper, not only would not add any adverse effects to the main functionally of the suspension, but it would also provide a better dynamics, and enhance the vehicle fuel consumption (by regenerating a portion of wasted vibration energy). In the second step, the hybrid damper concept is extended to an active hybrid electromagnetic vibration isolation systems. To achieve this target, a passive pneumatic spring is fused together with an active electromagnetic actuator in a single hybrid package. The active electromagnetic component maintains a base line stiffness and support for the system, and also provides active vibration for a wide frequency range. The passive pneumatic spring makes the system fail-safe, increases the stiffness and support of the system for larger masses and dead loads, and further guarantees a very low transmissibility at high frequencies. The FEM and experimental results confirmed the high force density of the proposed electromagnetic component, comparing to a voice coil of similar size. In the proposed design, with a diameter of ~125 mm and a height of ~60 mm, a force variation of ~318 N is obtained for the currents of I=±2 A. Furthermore, it is demonstrated that the proposed actuator has a small time constant (ratio of inductance to resistance for the coils) of less than 5.2 ms, with negligible eddy current effect, making the vibration isolator suitable for wide bandwidth applications. According to the results, the active controllers are able to enhance the performance of the passive elements by up to 80% and 95% in terms of acceleration and force transmissibilities, respectively.