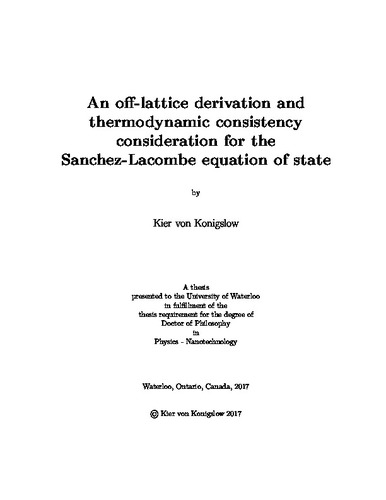 The application of the Sanchez-Lacombe equation of state (SL-EOS) to homogeneous polymeric mixtures is requisite for the application of some types of Self-Consistent Field Theory (SCFT) to inhomogeneous mixtures. It has recently been observed that the SL-EOS fails to adequately describe the saturated polymer-solvent mixtures considered in polymeric foaming. This observation portends poor outcomes for the application of SCFT to the inhomogeneous polymer mixtures that constitute foams. In order to investigate this failure, an off-lattice method for deriving the SL-EOS is presented. In doing so, it is shown that the phase equilibrium inconsistencies introduced into the mixture formulation through hole volume mixing rules cannot be corrected, as previously proposed. Rather, it is found that any mixing rule applied to the hole volume introduces impermissible thermodynamic inconsistencies to the theory. A new variant of the theory for use with saturated polymer-solvent mixtures is proposed, eliminating mixing rules in favour of a constant hole volume. This variant is successfully applied to the solubility data of saturated binary and ternary polymer-solvent mixtures, indicating that the previously observed poor performance of the SL-EOS for such mixtures was partly the result of the thermodynamic inconsistencies. Fair agreement is also achieved for swelling data for the same mixtures. A physical interpretation of hole volume is put forward, characterizing them in terms of rudimentary averaged correlations. The interpretation relates these correlations to the architecture of polymer molecules, evidenced by consideration of both pure fluids and mixtures. The large number of conflicting literature parameters is addressed by proposing a best practice parameter estimation procedure based on nonlinear least-square fitting, for both for pure fluids and mixtures. Poor performance in some literature parameters is found to be related to sub-optimal parameter estimation practices, namely those that include few data points and those that encompass the critical point. An additional constraint is proposed for semi-empirical statistical thermodynamical theories that include features without physical basis and use thermodynamic principles to derive material properties, asserting that ensemble equivalence should be imposed. This constraint is applied through the imposition that equations of state derived from each thermodynamic potential be consistent.