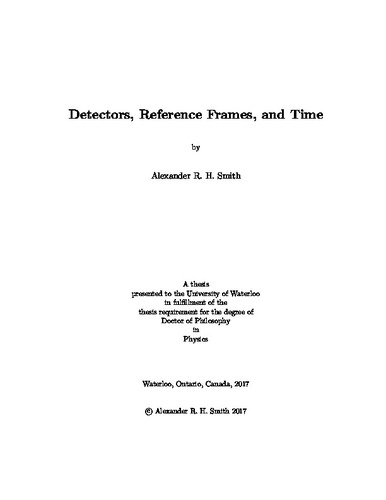 This thesis is divided into three parts. Part I investigates the behaviour of Unruh-DeWitt detectors on curved spacetimes admitting a Wightman function and the associated measurement model is identified. These detectors are used to probe the vacuum state of a scalar field on Minkowski space, topological identifications of Minkowski space, the (2+1)-dimensional BTZ black hole, and the ℝ𝐏² geon black hole. We demonstrate that a static detector operating in the exterior region of the ℝ𝐏² geon is sensitive to the non-stationary features behind its horizons. Furthermore, we generalize the entanglement harvesting protocol, in which entanglement is transferred from a quantum field to a pair of detectors, to detectors in arbitrary spacetimes admitting a Wightman function. We realize this protocol in Minkowski space, topological identifications of Minkowski space, and the BTZ black hole. In particular, we illustrate operationally how spacetime curvature affects vacuum entanglement in the exterior region of the BTZ black hole. Part II examines quantum reference frames associated with noncompact groups, such as the translation group and the group of inertial reference frames. We show that the 𝐺-twirl—the average of a quantum state over the group associated with changes of a classical reference frame—results in non-normalizable states when the group is noncompact. In the case of compact groups, the 𝐺-twirl is used to construct a relational state independent of a classical reference frame. As a result of the 𝐺-twirl producing non-normalizable states, this relational description fails when the relevant group is noncompact; in this case an alternative relational state is identified as a trace over external degrees of freedom of a composite system. Furthermore, we generalize a communication protocol between two parties lacking a common classical reference frame to the case when the group describing transformations of their reference frame is a 1-dimensional noncompact Lie group. Motivating these investigations is the aspiration for a relational relativistic quantum theory where the group of reference frames is the noncompact Poincaré group. Part III generalizes a proposed solution to the problem of time in quantum gravity known as the conditional probability interpretation of time. This formalism is based upon conditioning a solution to the Wheeler-DeWitt equation on a subsystem of the universe, serving as a clock, being in a state corresponding to a time 𝑡. Doing so assigns a conditional state to the rest of the universe |𝝍_S(𝑡)⟩, referred to as the system. We demonstrate that when the total Hamiltonian appearing in the Wheeler-DeWitt equation contains an interaction term coupling the clock and system, the conditional state |𝝍_S(𝑡)⟩ satisfies a non-Markovian modified Schrödinger equation in which the system Hamiltonian is replaced with a self-adjoint integral operator.