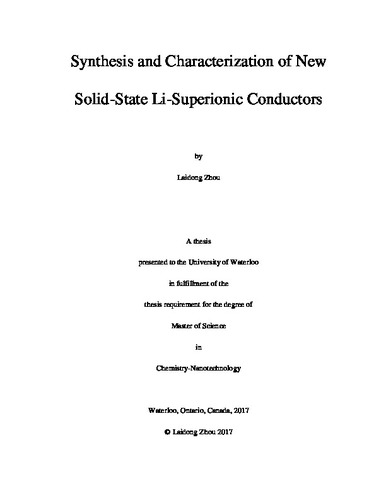 Compared with lithium ion batteries which use liquid electrolyte, all solid-state lithium batteries (ASSLBs) show great potential in improving the safety and achieving both high power and energy densities. This has driven researchers to make a lot of efforts to develop the ASSLB technologies. However, much work still has to be done on the selection and modification of solid electrolyte candidates. In addition, traditional solid-state reactions that are widely used to synthesize solid electrolytes generally cost high and are hard to scale-up. Thus, the development of cost-effective and simple synthesis method, in addition to the discovery of new solid electrolytes, is important to move this field forward. Solid state electrolytes are the essential component for high energy density ASSLBs. Argyrodite materials Li6PS5X (X=Cl, Br) are one of the best candidates due to their high ionic conductivity and the ability to form a stable interphase with a Li metal anode as well as some lithium transition metal oxide cathode materials. Neverheless, new synthesis methods beyond traditional all solid state approaches are required to reduce the cost and promote scale-up. Herein, I report a direct solution-based synthesis of argyrodites Li6PS5X (X = Cl, Br, I), as discussed in Chapter 3, with 100% degree of crystallinity. The solid electrolytes show high ionic conductivities up to 2×10-3 S/cm for X = Cl, Br and negligible electronic conductivities. This solution synthesis method is not only scalable, but also provides new insight into simple synthesis of other halide-thiophosphate based solid electrolytes. The argyrodite Li6PS5I shows a poorer ionic conductivity but can be increased by antimony-doping. The doping would also improve the stability of the solid electrolytes against air and moisture. Antimony-doping will change the unit cell size and halogen disorder. The effects of unit cell size and halogen disorder are investigated to study the origin of the high ionic conductivity in the argyrodite phases. Chapter 4 discusses the synthesis of Li3Y(PS4)2 and Li6Y3(PS4)5 which can be potentially used as solid electrolytes. Phase pure Li6Y3(PS4)5 was successfully synthesized, however a relatively low conductivity 3.6×10-6 S/cm was obtained. The effect of aliovalent doping, which can introduce Li-ion interstitials and vacancies into the lattice, was investigated with Ca2+ or Zr4+ doping into the Y3+ site. Slightly increased conductivity was obtained for Ca2+ doping, but a decreased conductivity was shown for Zr4+ doping. The low conductivities in all cases is possibly due to the low crystallinity of the products. Further modification of synthesis conditions could further improve the ionic conductivity.