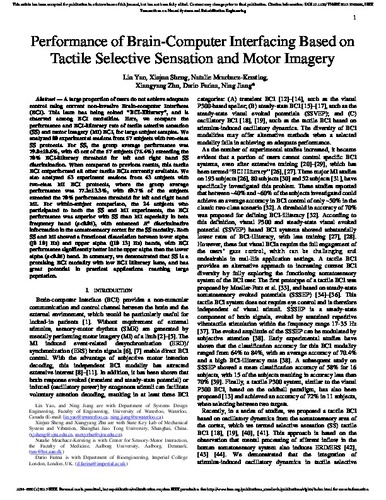 A large proportion of users do not achieve adequate control using current non-invasive Brain-computer Interfaces (BCI). This issue has being coined “BCI-Illiteracy”, and is observed among BCI modalities. Here, we compare the performance and BCI-illiteracy rate of tactile selective sensation (SS) and motor imagery (MI) BCI, for large subject samples. We analyzed 80 experimental sessions from 57 subjects with two-class SS protocols. For SS, the group average performance was 79.8±10.6%, with 43 out of the 57 subjects (75.4%) exceeding the 70% BCI-illiteracy threshold for left and right hand SS discrimination. When compared to previous results, this tactile BCI outperformed all other tactile BCIs currently available. We also analyzed 63 experiment sessions from 43 subjects with two-class MI BCI protocols, where the group average performance was 77.2±13.3%, with 69.7% of the subjects exceeded the 70% performance threshold for left and right hand MI. For within-subject comparison, the 24 subjects who participated to both the SS and MI experiments, the BCI performance was superior with SS than MI especially in beta frequency band (p<0.05), with enhanced R2 discriminative information in the somatosensory cortex for the SS modality. Both SS and MI showed a functional dissociation between lower alpha ([8 10] Hz) and upper alpha ([10 13] Hz) bands, with BCI performance significantly better in the upper alpha than the lower alpha (p<0.05) band. In summary, we demonstrated that SS is a promising BCI modality with low BCI illiteracy issue, and has great potential in practical applications reaching large population.