Maternal Adaptations and Lipid Mobilization During Pregnancy in Rats 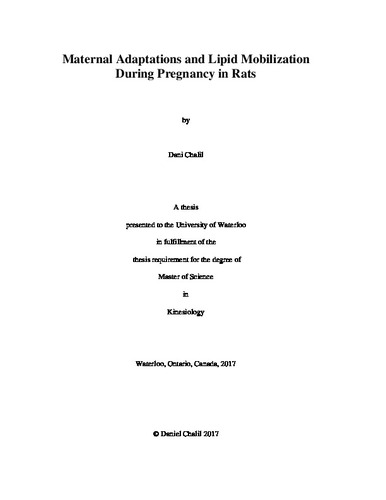 Docosahexaenoic acid (DHA) is a major structural fatty acid in brain and is required for fetal growth and development. DHA in maternal plasma increases during pregnancy to meet the placental transport demands of the fetus. Previously, we observed that 16:0/DHA phosphatidylcholine (PC) increased dramatically in plasma during pregnancy which was associated with increased hepatic expression and activity of phosphatidylethanolamine N-methyltransferase (PEMT), an enzyme that produces PC. Using hepatic tissue from the same rodent model, various pathways involved in lipid synthesis and secretion that could also support maternal DHA mobilization were presently examined. Targeted mRNA expression and immunoblotting assessments were used. In addition, a quadrupole-time of flight tandem mass spectrometry lipidomic method using alternating low-energy full-scan MS scans and high-energy collision-induced dissociation MS/MS scans (QTOF-MSE) was used to examine changes across various acyl species of lipids at baseline, 15 days and 20 days of pregnancy, and 7 days postnatal. There was an increased mRNA expression of both ApoA1 and ApoA2, consistent with previous data. However, it appears this was not a result of increased expression of lipoprotein assembly enzymes examined. Surprisingly, there was no evidence of an upregulation of an acyltransferase, but PLA2G15, a phospholipase, was decreased throughout pregnancy in both mRNA and immunoblot analysis. This could be evidence of reduced phospholipid remodeling, considering the previous observation of the upregulation of PEMT. Lipidomic analyses revealed widespread changes in numerous acyl species of lipids in plasma and liver across all pregnancy time-points although comprehensive acyl species identification was not possible due to the nature of MSE data. Nevertheless, there was evidence of depleted hepatic DHA levels at the postnatal time point. We have gained further insight into lipid synthesis and mobilization throughout pregnancy, and into novel lipidomic techniques. Additional research is needed to determine the lipid species identify of numerous detected compounds in the present analysis. In addition, the decreased DHA status of several hepatic lipid species, indicates that future studies examining the post-partum period and the effect of lactation is warranted.