Fatwas against Terrorism and Terrorist Organizations: An Examination of a Potential Counter-Terrorism Tool 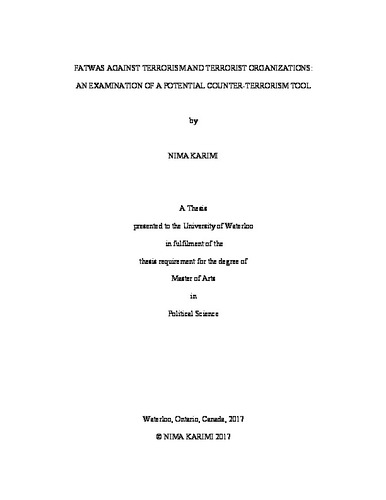 From a historical perspective, one of the primary reasons for issuing Islamic religious edicts, commonly known as fatwas, was to incite terrorism, and many have been successful in achieving their aims. In response, fatwas that challenge terrorism and counter terrorist organization actions have also been issued, however, they have been rarely followed. The literature and discourse on the subject are sparse and problematic, and have provided unconvincing explanations; devoid of a systematic approach to the question, they do not provide the context necessary to understand why counter-terror fatwas have been ineffective against Islamist terrorism, and none investigated whether the fatwas interacted directly with the Islamist core narrative. In this thesis, I argue that counter-terror fatwas have been ineffective because they have not discussed or challenged the Qur’anic verses that endorse violence and justify Islamist terrorism, and they received no digital news coverage. Using a systematic approach, I employ a four-way typology to measure these two variables—content sophistication and online news coverage—to provide an answer to the thesis question, and I use supplementary interviews to support and explain these findings. As addressed in my thesis, most counter-terror fatwas did not challenge or target the Qur’anic verses that specifically condone violence, yet they all received digital media coverage. The most plausible interview data suggests that, unlike a conservative line of reasoning, a moderate one is required to challenge the Qur’anic verses, but such a line of reasoning may not be appreciated by the public. Overall, I use my findings to suggest that, when given specific modifications, counter-terror fatwas can become much more effective in deterring Islamist terrorism, especially when paired with other counter-narrative initiatives.