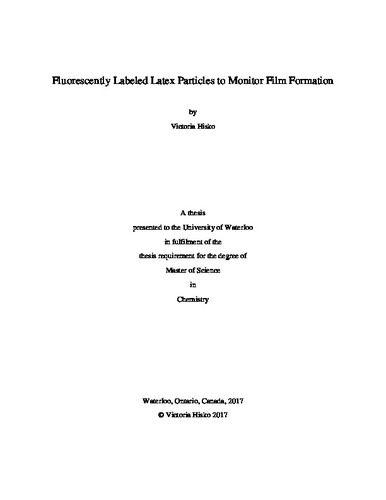 The influence of the length of an oligo(ethylene glycol) spacer (EGn, where n is the number of ethylene glycol units) in a 1-pyrenemethoxy-EGn methacrylate (PyEG-MA) monomer on the incorporation of the monomer into a poly(n-butyl methacrylate) (PBMA) latex and on the diffusion of the pyrene-labeled PBMA (PyEGn-PBMA) in latex films was investigated. The PyEGn-MA monomers were prepared by two different methods. The anionic polymerization of ethylene oxide, using potassium 1-pyrenemethoxide as initiator, yielded ethoxylated 1-pyrenemethanol that was reacted with methacrylic anhydride to yield the PyEGn-MA monomer. Alternately, monotosylated well-defined ethylene glycol oligomers were successively coupled with 1-pyrenemethoxide and methacrylic anhydride. The monomers were copolymerized with n butyl methacrylate by emulsion polymerization. A longer EG7.4 spacer was found to enhance the incorporation of the PyEG7.4MA monomer up to 3.2 mol%, substantially higher that 1.9 mol% achieved previously with an EG3 spacer. The higher incorporation of PyEG7.4MA into the Py-PBMA latex led to a stronger pyrene excimer fluorescence (PEF) signal in the spectrum of the latex film. The goal was to use these fluorescently labeled particles to probe interparticle polymer diffusion (IPD) during film formation. Several issues arose in the copolymerization of PyEG7.4MA and n-butyl methacrylate (BMA). The aggregation of PyEG7.4MA into flower-like micelles was observed. Even though steps were taken to mitigate this effect in the emulsion polymerization process, the pyrene molecules tended to be more concentrated near the surface of the latex particles. This resulted in irreproducible annealing results, and it is recommended that these particles not be employed for the study of IPD.