HybridPointing Touch: A Technique to Switch Between Absolute and Relative Pointing on Large Touch Screens 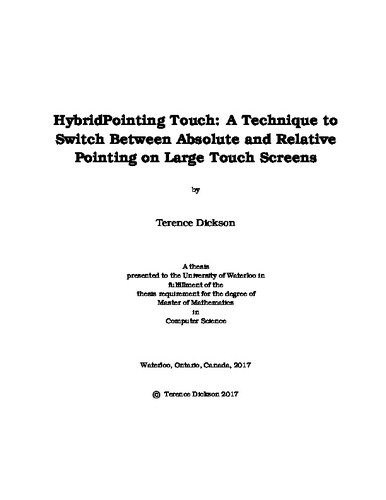 We extend Forlines et al.'s idea of mixed absolute and relative "HybridPointing" to large multitouch displays. In our bimanual "CursorTap" interaction technique, one hand triggers a kinaesthetic relative pointing mode while the other controls a distant cursor similar to a large touchpad. A controlled experiment compares CursorTap to standard absolute touch input, and a "Drag" technique, where all display content may be dragged to the user. Our results show CursorTap is fastest when accessing distant targets and returning to nearby targets, a common usage scenario. Overall, the measured selection times across distances is nearly flat for CursorTap, but linearly increases for the absolute and Drag techniques. As further validation, a second study explores how CursorTap is used in a more open setting. We developed a two-person game to create opportunities to use CursorTap under cooperative and competitive settings. The results demonstrate a willingness to use CursorTap, and reveal situations and input modalities where usage is most likely.