Small Towns in Transitions, an Exploratory Study in Collingwood, Ontario 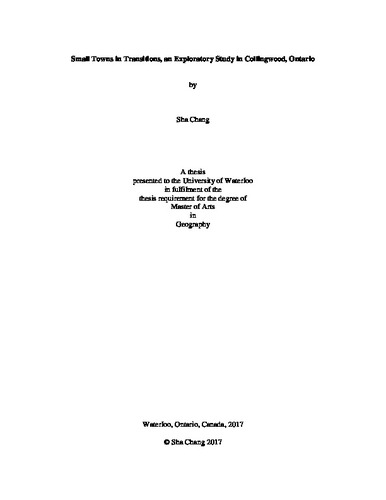 Collingwood, Ontario is experiencing an economic and social transition away from resource-dependent orient toward place-based development trajectory, after its economic breakdown of the traditional industries (e.g., shipbuilding) in the 1980s. Boom and bust cycles in single industry towns have been common not only in Canada but throughout the world. The transition in Collingwood is an alternative development strategy that leverages the local economic, social and environmental capitals, while it brings some new development challenges. This thesis offers insights into the characteristics of the economic and social transitions, and their interlinkages by employing Collingwood as a case study. The data on which this thesis is based includes 30 semi-structured interviews with key informants representing in-migrants and residents, economic and political representatives, 43 survey questionnaires, field observations and secondary statistics. Research findings indicate although economic and social transitions contain relative independence, multifaceted correlations exist between the two. Collingwood’s economic base changes from shipbuilding toward the tertiary sector through a focus on natural, social and cultural amenities. The transition is a neo-endogenous approach driven by place-based municipal actions, implemented by entrepreneurs, and enabled by amenity-seeking in-migrants and the expansion of the mountain resort in the neighboring town. The place-based development draws counter-urbanites in, and their urban consumptive behaviours reinforce ongoing economic and social transitions. Gentrification, economic and social polarization emerge resulting in livelihood uneasiness for the local residents. The research concludes that to create a more restorative, liveable and equitable society through establishing a shared place-identity among the heterogeneous stakeholder groups in the ongoing process of place-making could lead to positive and sustainable integration between economic and social development.