Wetland Reclamation in England: Medieval Risk Culture and the 1396 Commission of Sewers for Pevensey Levels 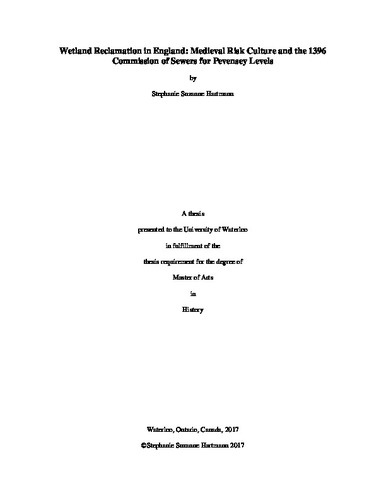 This paper examines wetland reclamation in England between the eighth and sixteenth centuries, with a special focus on the Pevensey Levels during the fourteenth century. Coastal marsh communities had access to significant raw materials and resources as well as increased agricultural productivity on sections of reclaimed land. This paper will examine medieval and Early Modern perceptions of wetland environments over time and evaluate scholarly theories of wetland marginality. Medieval populations could not effectively access the benefits wetlands provided without great exposure to risk factors, including flooding. Medieval coastal marsh communities in England developed a culture heavily influenced by constant exposure to risk that demonstrated high levels of cooperation, resilience, and ingenuity. The medieval risk culture represented in English marshes also produced risk sensitivity that could inform decisions regarding the probable success of reclamation efforts and their potential profitability. The 1396 Commission of Sewers for the Pevensey Levels, East Sussex demonstrates the negligence of landowners, whose economic interests relied upon successful wetland reclamation and flood defences. This legal case, combined with national and local economic analyses and an investigation into the role of climate change and increased storm activity along the English coast during the fourteenth century, will facilitate a discussion relating to negligence within medieval wetland risk cultures during a period of increased risk.