The Structural Geology, Kinematics and Timing of Deformation at the Superior craton margin, Gull Rapids, Manitoba 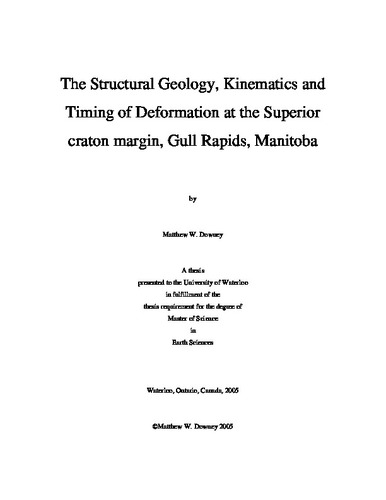 The Gull Rapids area, Manitoba, lies on the Superior craton margin and forms part of the Superior Boundary Zone (SBZ), a major collisional zone between the Archean Superior craton and the adjacent Paleoproterozoic Trans-Hudson Orogen. There are two main rock assemblages at Gull Rapids: orthogneisses (of possible Split Lake Block origin) and supracrustal rocks (metavolcanic and metasedimentary). Late, crosscutting felsic and mafic intrusive bodies (mostly dykes and sills) are used to constrain the relative and absolute timing of deformation and metamorphism. <br /><br /> The Gull Rapids area records a complex tectonic history. The area experienced four generations of Neoarchean ductile and brittle deformation (G1 ? G4) and one of Paleoproterozoic ductile-brittle deformation (G5). G1 deformation produced the main foliation in the map area, as well as local isoclinal folding which may be related to an early shearing event. M1a prograde mid-amphibolite facies metamorphism is contemporaneous with the early stages of G1. Widespread, tight to isoclinal sheath folding during G2 was recorded in the supracrustal assemblage, and is the result of southwest-side-up, dextral shearing during the early shearing event. A ca. 2. 68 Ga widespread phase of granitoid intrusion was emplaced late-G1 to early-G2, and is rich in metamorphic minerals that record conditions of M1b upper-amphibolite facies peak metamorphism. M1b metamorphism, late-G1 to early-G2 deformation, and intrusion of this felsic phase are contemporaneous. M2 retrograde metamorphism to mid-amphibolite facies was recorded sometime after M1b. G1 and G2 structures were re-folded during G3, which was then followed by G4 southwest-side-up, dextral and sinistral shearing, contemporaneous with late pegmatite intrusion at ca. 2. 61 Ga. This was followed by mafic dyke emplacement at ca. 2. 10 Ga, and then by G5 sinistral and dextral shearing and M3 greenschist facies metamorphism or hydrothermal alteration at ca. 1. 80 Ga. <br /><br /> Deformation and metamorphism at Gull Rapids post-dates emplacement and deposition of gneissic and supracrustal rocks, respectively. This deformation and metamorphism, except for G5 and M3, is Neoarchean (ca. 2. 68?2. 61 Ga), and represents a significant movement of crustal blocks: km-scale shearing of the supracrustal assemblage and consequent uplift of the Split Lake Block. Late deformation and metamorphism (G5, M3) may be related to the Paleoproterozoic Trans-Hudson orogeny. The Neoarchean and Paleoproterozoic zircon populations in the geochronological data suggest that the Gull Rapids area largely experienced Neoarchean deformation and metamorphism with a weak Paleoproterozoic overprint. All of the evidence presented above suggests that the Gull Rapids area lies in a part of the Superior Boundary Zone, yet does not lie at the exact margin of the Superior craton, and therefore does not mark the Archean-Proterozoic boundary proper in northeastern Manitoba.