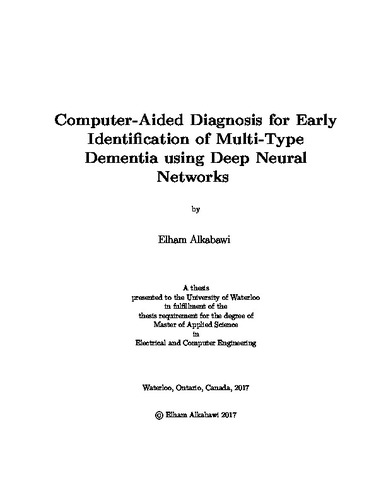 With millions of people suffering from dementia worldwide, the global prevalence of this condition has a significant impact on the global economy. As well, its prevalence has a negative impact on patients’ lives and their caregivers’ physical and emotional states. Dementia can be developed as a result of some risk factors as well as it has many forms whose signs are sometimes similar. While there is currently no cure for dementia, effective early diagnosis is essential in managing it. Early diagnosis helps people in finding suitable therapies that reduce or even prevent further deterioration of cognitive abilities, and in taking control of their conditions and planning for the future. Furthermore, it also facilitates the research efforts to understand causes and signs of dementia. Early diagnosis is based on the classification of features extracted from three-dimensional brain images. The features have to accurately capture main dementia-related anatomical variations of brain structures, such as hippocampus size, gray and white matter tissues’ volumes, and brain volume. In recent years, numerous researchers have been seeking the development of new or improved Computer-Aided Diagnosis (CAD) technologies to accurately detect dementia. The CAD approaches aim to assist radiologists in increasing the accuracy of the diagnosis and reducing false positives. However, there is a number of limitations and open issues in the state-of-the-art, that need to be addressed. These limitations include that literature to date has focused on differentiating multi-stage of Alzheimer’s disease severity ignoring other dementia types that can be as devastating or even more. Furthermore, the high dimensionality of neuroimages, as well as the complexity of dementia biomarkers, can hinder classification performance. Moreover, the augmentation of neuroimaging analysis with contextual information has received limited attention to-date due to the discrepancies and irregularities of the various forms of data. This work focuses on addressing the need for differentiating between multiple types of dementia in early stages. The objective of this thesis is to automatically discriminate normal controls from patients with various types of dementia in early phases of the disease. This thesis proposes a novel CAD approach, integrating a stacked sparse auto-encoder (SSAE) with a two- dimensional convolutional neural network (CNN) for early identification of multiple types of dementia based on using the discriminant features, extracted from neuroimages, incorporated with the context information. By applying SSAE to intensities extracted from magnetic resonance (MR) neuroimages, SSAE can reduce the high dimensionality of neuroimages and learn changes, exploiting important discrimination features for classification. This research work also proposes to integrate features extracted from MR neuroimages with patients’ contextual information through fusing multi-classifier to enhance the early prediction of various types of dementia. The effectiveness of the proposed method is evaluated on OASIS dataset using five different relevant performance metrics, including accuracy, f1-score, sensitivity, specificity, and precision-recall curve. Across a cohort of 4000 MR neuroimages (176 × 176) as well as the contextual information, and clinical diagnosis of patients serving as the ground truth, the proposed CAD approach was shown to have an improved F-measure of 93% and an average area under Precision-Recall curve of 94%. The proposed method provides a significant improvement in classification output, resulted in high and reproducible accuracy rates of 95% with a sensitivity of 93%, and a specificity of 88%.