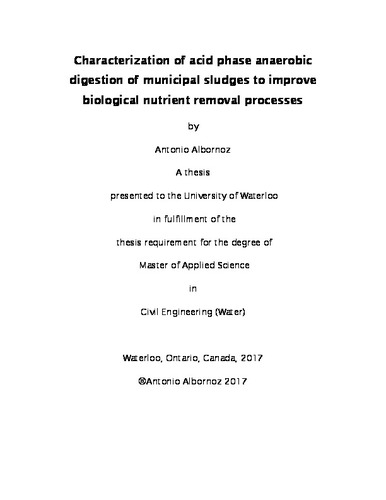 Enhanced biological phosphorus removal (EBPR) can improve the balance sheet for waste water treatment plants. However, for phosphate accumulating organisms (PAOs) to work efficiently, there needs to be a readily biodegradable carbon source as their substrate for growth. Side stream hydrolysis and acid-phase fermentation of the sludge can generate readily available carbon in the form of volatile fatty acids (VFAs). The VFAs are subsequently consumed by PAOs to support the phosphorus removal process. Phosphorus is then recovered from the waste activated sludge using various dewatering and sorting methods. This study evaluated modeling of side-stream acid-phase digestion of primary sludge to support consistent production of VFAs and thereby stabilize and optimize phosphorus removal processes. In this regard, hydrolysis processes were focused on since they are typically the rate-limiting step in anaerobic digestion. It was found that the literature fails to provide consistent information to aid in the modeling of this process, particularly with regards to the values of the hydrolysis rate constants and the sensitivity of these constants to environmental factors such as temperature, pH, and sludge composition. An experimental set up consisting of three semi-batch reactors provided data that was subsequently employed in the model evaluation. The reactors were fed with either primary sludge (PS), waste activated sludge (WAS), or a mixture of both (mixed liquor (ML)). The ML set up received 62% PS and 38% WAS by volume. The reactors were fed with sludge from the Elmira WWTP and were operated at an SRT of 6 days. Water quality parameters such as pH, NH3, COD, SS, TKN, VFA, PO4 were monitored using standard analytical methods. It was found that adding WAS to PS increased the hydrolysis of PS solids by 19% based on VFA produced by influent Total COD. BioWin model simulations employed this data to calibrate a baseline model that described the observed VFA production. It was found that traditional anaerobic hydrolysis rate expressions could not describe all data sets consistently. In an effort to improve the universality of the hydrolysis expression, two extensions for the model were considered. The product inhibition extension considered reduced hydrolysis at high VFA concentrations. This model performed well but improved with the second extension regarding enzyme concentration. It was found that including the effect of hydrolytic enzymes in the model can improve the ability of the model to predict results and it is suggested that the follow up research expands in this area to consider more specific enzymes.