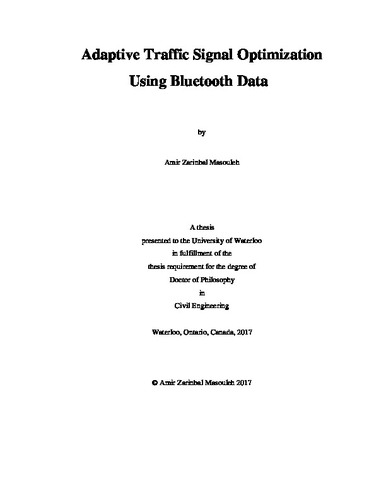 Traffic congestion continues to increase in urban centers causing significant economic, environmental, and social impacts. However, as urban areas become more densely developed, opportunities to build more roadways decline and there is an increased emphasis to maximize the utilization of the existing facilities through the use of more effective advanced traffic management systems (ATMS). In recent years, Bluetooth technology has been adapted for use as a sensor for measuring vehicle travel times along a segment of roadway. However, using Bluetooth technology in ATMS such as advanced traffic signal controls has been limited in part because there has been little research conducted to investigate the opportunity to estimate intersection control delay and desired travel time using Bluetooth collected data. Furthermore, until recently, there has been a lack of tools, such as simulation, to predict the behavior of the system before it is developed and deployed. Therefore, the main intention of this research was to develop a robust framework for adaptive traffic signal control using Bluetooth detectors as the main source of data. In this thesis, I addressed the aforementioned challenges and proposed the first integrated framework for real time adaptive traffic signal management using Bluetooth data through the following steps: 1. I have developed a state of the art simulation framework to simulate the Bluetooth detection process. The simulation model was calibrated and validated using field data collected from two custom built Bluetooth detectors. The proposed simulation framework was combined with commercially available traffic microsimulation models to evaluate and develop the use of Bluetooth technology within ATMS. 2. I proposed two methods for estimating control delay at signalized intersections using Bluetooth technology. Method 1 requires data from a single Bluetooth detector deployed at the intersection and estimates delay on the basis of the measured Bluetooth dwell time. This model has a high level of accuracy when the queue length is less than the effective range of the Bluetooth detectors but performs poorly when queues exceed the detector range. Method 2 uses Bluetooth measured travel time to estimate control delay. This method requires data from two Bluetooth detectors, one at the intersection and one upstream. This method can be used regardless of the length of queues. The methods were evaluated using a custom-built simulation framework and field data. The results show that the proposed methods provide an accuracy of mean absolute error equal to 3 seconds, indicating that they are suitable for estimating control delay at signalized intersections. 3. I proposed a method to dynamically optimize green splits of signalized intersection on the basis of control delay estimated from Bluetooth detector data. Evaluation of the proposed method using a simulated hypothetical intersection demonstrated that proposed method is able to provide reduction in average delay in comparison with fixed signal timing and fully actuated controller. 4. I proposed and evaluated a method to estimate the desired travel time of the platoon in real-time and then use this estimate to optimize the offset of signalized intersections in a corridor. The proposed method has been evaluated using simulated data for a range of traffic demands and weather conditions and results indicate that the proposed method can provide up to a 75% reduction in average vehicle delay for vehicles discharging in the coordinated phase in comparison with fixed offset timing in different weather conditions.