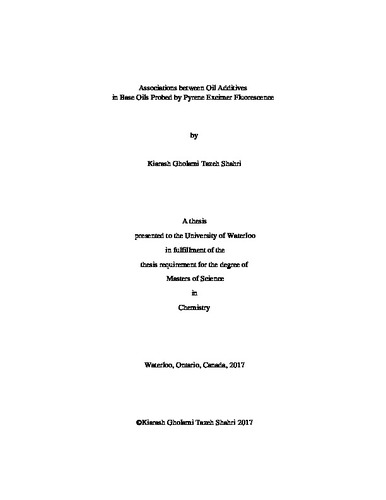 A recently developed method based on pyrene excimer fluorescence was used to probe the interactions of important polymeric oil additives. First, three ethylene-propylene (EP) copolymers representative of viscosity index improvers (VII) were maleated and fluorescently labeled with pyrene to yield three Py-EP samples. Each sample was dissolved in oil and toluene, an apolar substitute for oil. The fluorescence spectra of the Py-EP samples were acquired and analyzed to obtain a quantitative measure of the molar fraction (finter) of the pyrene labels that formed excimer intermolecularly for the Py-EP samples in oil and toluene as a function of solution temperature. The results demonstrated that finter remained more-or-less constant for the amorphous Py-EP sample in both solvents. However, the solutions of the semicrystalline Py-EP samples in oil and toluene showed an anomalous behavior for finter at intermediate temperatures, that was attributed to the formation of crystalline microdomains by the semicrystalline Py-EP samples and resulted in a sharp increase in the local pyrene concentration [Py]loc and thus finter. Moreover, finter and the molar fraction of aggregated pyrenes (fagg) were found to be larger in oil than in toluene for a same Py-EP sample, suggesting that oil was a worse solvent than toluene to solubilize the Py-EP samples. These experiments were repeated to determine finter for solutions of the Py-EP samples in oil in the presence of two pour point depressants (PPDs). The results suggested that PPDs slightly increased finter for the Py-EP samples, indicating some level of interactions between the two polymers. However since the succinimide group used to link the pyrene labels to the EP backbone induced intermolecular interactions that might affect the conclusions drawn from the finter values, the focus of the study was changed to investigate the interactions between a pyrene-labeled poly(alkyl methacrylate) (Py-PAMA) used as a PPD mimic and EP copolymers in oil. In this case, the pyrene label was attached to the PAMA backbone via the same ester bond that connected the alkyl chains to the polyester backbone. Consequently introduction of the pyrene label to PAMA did not induce any unwanted interactions between the Py-PAMA molecules. The finter-vs-T profiles for two Py-PAMA samples in oil were determined. They also reflected a contraction of the polymer coils due to the crystallization of the alkyl side chains as the solution temperature was lowered. The temperature where the transition occurred was found to be dependent on the side chain length as would be the case for alkanes of different lengths. Based on these results, a poly(octadecyl methacrylate) sample labeled with 6.7 mol% pyrene Py(6.7)-PC18MA was selected and its finter-versus-T profiles were obtained in the presence of different oil additives in oil and octane. The addition of EP copolymers to the Py(6.7)-PC18MA solutions resulted in an increase in finter indicative of interactions between the EP copolymers and Py(6.7)-PC18MA molecules in oil. The increase in finter was found to be more pronounced at high temperatures for both amorphous (EP(AM)) and semicrystalline (EP(SM)) EP copolymers. At low temperatures, EP(AM) led to an increase in finter for Py(6.7)-PC18MA but not EP(SM) as it had crystallized and could no longer interact with Py(6.7)-PC18MA. Engine oils naturally contain a substantial amount of wax in their formulation which can promote interactions between different oil additives like VIIs and PPDs. Therefore, octane was employed as a wax-free engine oil substituent. An amount of wax similar to that present in engine oils was added to the Py(6.7)-PC18MA solution in octane to study its effect on the finter-versus-T profile. The presence of wax increased finter for Py(6.7)-PC18MA as would be expected from a PPD mimic that is believed to bind to wax crystals and control their growth. Naked EP copolymers were then added to the mixture of Py(6.7)-PC18MA and wax in octane. This led to another increase in finter. Such an effect was observed over the entire temperature range for the amorphous EP copolymer, while the crystallization of the semicrystalline EP copolymer at low temperatures canceled the effect of this additive on finter for Py(6.7)-PC18MA in a 10 g.L wax solution in octane. The experiments conducted in this thesis expanded the applicability of the procedure originally developed by S. Pirouz to determine the level of intermolecular interactions between EP copolymers in toluene to PAMAs in engine oil and octane. This study provided quantitative information about the level of interactions between Py(6.7)-PC18MA and two EP copolymers that are representative of the interactions that would exist between PPDs and VIIs in engine oils.