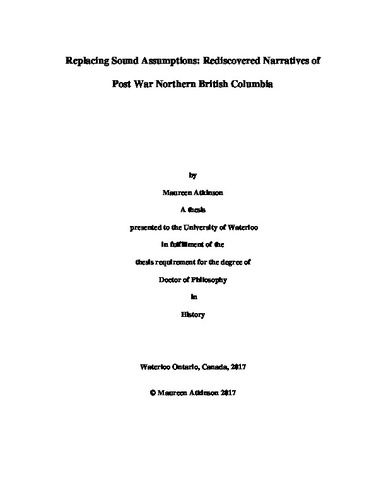 Through a close analysis of a regional public radio archive, this dissertation reveals how residents of northern British Columbia defined their identities, expressed discontent, and revealed their aspirations and expectations for Canadian society. No matter what age, gender, or ethnic affiliation, the people of the region, when studied in a historical framework, challenge and alter previously held historical assumptions about a remote, isolated place, about the Canadian Broadcasting Corporation as a national cultural institution, and about the wider Canadian society during the three decades after the Second World War. The dissertation addresses shifting historical methodologies. It moves away from text-based interpretations of the past to listen closely to the recordings created by the CBC radio station in Prince Rupert, British Columbia, in order to gain further precision as to regional narratives and historical time frames. By doing so, new historical narratives are produced that more accurately reflect both the region and Canada as a whole. This dissertation shows that Canadian identity was tied to larger goals of nation building. The CBC mandate may have promoted such nation building practices, but with mixed results on a regional level. Listening to the recorded voices of northern British Columbia residents encourages us to reconsider historical assumptions about rural regions, national cultural institutions, and the wider Canadian society in the post Second World War era. Indigenous peoples were active listeners, and used the medium of radio to communicate personal messages, political agency and cultural integrity. Women were also active on the air (even though not hired as staff announcers) and they often reflected the localized, sometimes subversive feminist activities. The region’s isolation made events there seem distant or unimportant to Canadians, especially during events such as when the Granduc avalanche highlighted the anti-American sentiments and the physical and financial risks of resource development. Although media studies and cultural critiques can assist our understanding of radio archives, historical studies may best express the significance of such events, resulting in a more complete account of the social and temporal context of this important time period.