Characterization of Genes involved In Development and Senescence 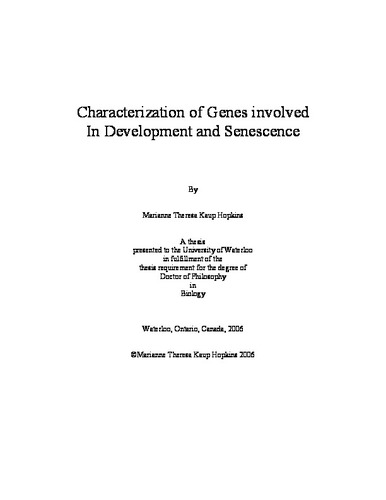 Plant development is complex and highly regulated. Tens of thousands of genes have been sequenced for the model plant <em>Arabidopsis thaliana</em>, yet few have been functionally annotated and characterized. This thesis describes the expression analysis and characterization of four genes in <em>Arabidopsis</em>. Three of these belong to the eukaryotic translation initiation factor 5A (eIF5A) gene family, and the fourth encodes diacylglycerol acyltransferase 1 (DGAT1). Putative roles for these genes in the development of <em>Arabidopsis thaliana</em> are described. <br /><br /> eIF5A is the only known protein to contain the amino acid hypusine. It has been demonstrated previously that eIF5A acts as a shuttle protein, moving specific mRNAs from the nucleus to the cytoplasm for translation. In <em>Arabidopsis thaliana</em> (At), there are three isoforms of eIF5A, and it is clear from the present study that they each have a unique temporal and spatial expression pattern. AteIF5A-1 and -2 are up-regulated during natural senescence and wounding/pathogenesis, respectively, and it is proposed that they regulate the onset of programmed cell death during these events. AteIF5A-3 is up-regulated in elongating meristem of the root, and it is proposed that this isoform is involved in cell growth. <br /><br /> Over-expression of the individual <em>AteIF5A</em> isoforms <em>in planta</em> resulted in pleiotropic phenotypes. When <em>AteIF5A-1</em> or <em>AteIF5A-2</em> was over-expressed, the phenotypes observed were indicative of their putative roles in the translation of proteins required for programmed cell death. When <em>AteIF5A-3</em> was over-expressed, the phenotypes were indicative of a role for this protein in the regulation of cell and tissue elongation. <br /><br /> Lipid analysis of rosette leaves from <em>Arabidopsis thaliana</em> revealed an accumulation of triacylglycerol with advancing leaf senescence coincident with an increase in the abundance and size of plastoglobuli. The terminal step in the biosynthesis of triacylglycerol in <em>Arabidopsis</em> is catalyzed by DGAT1. When gel blots of RNA isolated from rosette leaves at various stages of development were probed with the <em>Arabidopsis</em> EST clone, E6B2T7, which has been annotated as DGAT1, a steep increase in DGAT1 transcript levels was evident in the senescing leaves coincident with the accumulation of triacylglycerol. The increase in DGAT1 transcript correlated temporally with enhanced levels of DGAT1 protein detected immunologically. Two lines of evidence indicated that the triacylglycerol of senescing leaves is synthesized in chloroplasts and sequesters fatty acids released from the catabolism of thylakoid galactolipids. First, triacylglycerol isolated from senescing leaves proved to be enriched in hexadecatrienoic acid (16:3) and linolenic acid (18:3), which are normally present in thylakoid galactolipids. Second, DGAT1 protein in senescing leaves was found to be associated with chloroplast membranes. These findings collectively indicate that DGAT1 plays a role in senescence by sequestering fatty acids de-esterified from galactolipids into triacylglycerol.