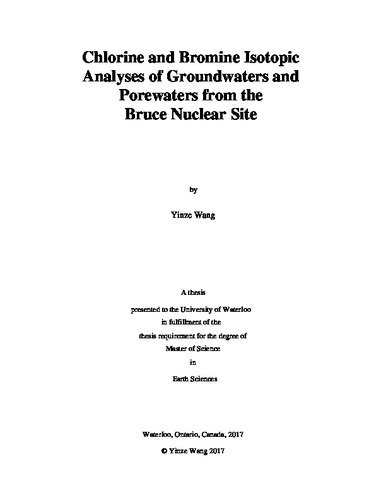 This study reports chlorine (δ37Cl) and bromine (δ81Br) isotopic values for groundwaters and pore fluids from early Paleozoic (Cambrian to Devonian) sedimentary rocks at the Bruce Nuclear Site near Kincardine, Ontario, Canada. The Cl and Br isotope data, in conjunction with their concentration data, are used to ascertain fluid origins as well as to identify processes responsible for isotopic fractionation. The sampled groundwaters and porewaters (from boreholes DGR-3/4) have isotopic and geochemical signatures similar to formation fluids from the same geological units elsewhere in the Michigan Basin, based on comparison with regional sedimentary formation water databases. The Silurian Salina A1 and Guelph Formation groundwaters, sourced within the Michigan Basin, have low δ81Br. The Salina A1 samples appear to have been altered by halite dissolution and mixing with cold climate recharge. In contrast, the Cambrian groundwaters have high δ37Cl and δ81Br values that are similar to Cambrian brines found in the Appalachian Basin to the east and south. The halide isotopic signatures of the Cambrian groundwaters suggest that these fluids may be very old, and their isotopic compositions have been preserved since emplacement during basinal fluid migration events in the early Paleozoic. In general, Devonian to Cambrian porewaters at the site have similar δ37Cl and δ81Br values as fluid samples from equivalent geological units listed in the combined regional database compiled from Shouakar-Stash (2008), Hobbs et al. (2011) and Skuce et al. (2015). However, some Cambrian and Ordovician porewater samples have δ37Cl and δ81Br values that are distinctive from regional sedimentary groundwaters found in the equivalent units. The Early Silurian to Late Ordovician stratigraphic sequence (~400 m thick) at the site has been effectively defined as a diffusion-dominated system (Clark et al. 2013; Al et al. 2015). However, δ37Cl and δ81Br values of the porewater samples at the site are not easily explained by a simple diffusion process across multiple geological layers of highly variable sedimentological characteristics. The halide isotopic profiles throughout the stratigraphic sequence was potentially impacted by several fractionation mechanisms over long geologic time frames. These physical or biological processes include organic and/or microbial halide gas production and degassing, salt dissolution, diagenesis/dolomitization (early Phanerozoic), tectonically-driven fluid migrationand/or hydrothermal fluid mixing (late Phanerozoic) as well as localized diffusional migration of porewater solutes within stratigraphic units. In addition, the initial depositional environment may have influenced the δ37Cl and δ81Br isotopic signatures of the sedimentary porewaters from the site. This depositional influence can be tied to temporal variations in the relative fluxes of continental weathering inputs and mantle inputs (degassing from ocean volcanic sources) of Cl and Br to seawater. This study shows that an increased understanding of transport processes, and the origin and relative ages of potential end-member fluids, can be gained through the analyses of porewater Cl and Br isotope compositions together with chemical and isotopic parameters already used to assess solute longevity.