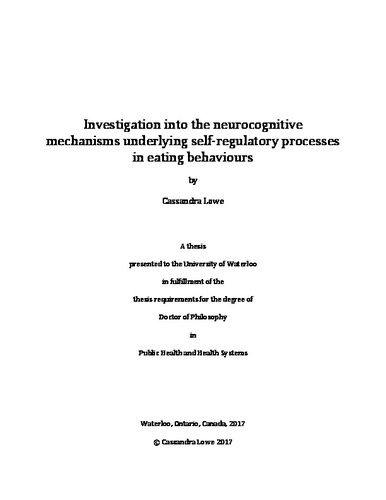 Prior research has demonstrated that the integrity of the executive control system is correlated with obesogenic behaviour tendencies in a theoretically meaningful way. However, due to the paucity of experimental evidence demonstrating directionality and causality of this relation, there is a need for research investigating the nature via which prefrontal-mediated executive control abilities influence vulnerability to obesity-conducive eating habits (i.e., the overconsumption of calorie dense snack foods). As such, current body of research employed experimental methodologies to assess the causal relation between the functionality of the prefrontal cortex (PFC) and dietary self-restraint as mediated via executive control. A secondary objective was to determine the capacity via which aerobic exercise and continuous theta burst (cTBS) methodologies can be used to both attenuate and optimize executive control within an experimental context. Study 1 used meta-analytic methods to determine the reliability of validity of both up-regulatory (intermittent theta burst stimulation; iTBS) and down-regulatory (cTBS) theta burst stimulation (TBS) methodologies targeting the PFC on executive function (EF) task performance. Findings suggest that TBS protocols appear to be valid and effective means of modulating EF task performance within experimental contexts. However, the attenuating effects of cTBS may be more reliable than the excitatory effects of iTBS. Study 2 utilized cTBS and EEG methodologies to assess the extent in which changes in attentional engagement to high caloric food images and cognitive control influence consumptive patterns. Findings indicated that the attenuation of activity in the left dorsolateral prefrontal cortex (dlPFC) via cTBS significantly impaired executive control abilities. Further, a significant increase in the cravings for and consumption of appetitive high caloric foods was apparent following active relative to sham cTBS, an effect that was mediated by a significant increase in the attentional engagement to high caloric food images. Most importantly, this effect was specific to high-caloric foods and did not translate to changes in cravings or consumption of low calorie foods. Study 3 sought to determine whether aerobic exercise methodologies can be used to enhance EF following temporary perturbations in dlPFC functionality. Findings indicated that an acute bout of moderate intensity exercise mitigated the cTBS-induced decrements in EF more quickly than the very light intensity control condition. Study 4 used the same aerobic exercise methodologies as Study 3 to determine if exercise-induced enhancements in executive control results in the subsequent transfer to self-control in the dietary domain. Findings revealed that a bout of moderate aerobic exercise can both enhance inhibitory control and improve dietary choices, providing the first evidence of a direct cross-domain transfer effect of exercise-induced cognitive enhancement to an unrelated domain. Together, these findings demonstrate that the attenuation and optimization of EFs results in subsequent changes in dietary self-restraint in the theorized directions.