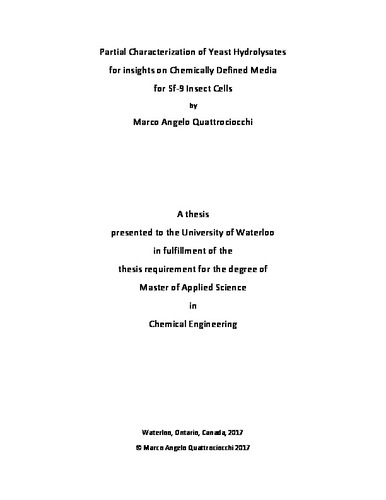 Yeast extract, or other varieties of yeast hydrolysate, have been used in combination with a lipid supplement to completely eliminate the need for fetal bovine serum during in vitro cultivations of insect cells. This has made the process cheaper and much more attractive for large industrial uses due to the higher availability of yeast extract over serum. While yeast extract represents a vital step forward in culture media, the gold standard of a chemically defined media with the same growth parameters has not been achieved. To better understand the hydrolysate composition, it was subjected to trace mineral analysis via ICP-OES while H-NMR was used to quantify the detectable organic compounds before, during, and after acid hydrolysis. Trace mineral analysis showed that yeast extract was the sole provider of silicon, chromium, nickel and vanadium, as well as a majority provider of zinc, manganese, copper, cobalt and iron. While silicon has no known function in metabolism, the other elements are of considerable interest complicated by their contributions to detrimental free radical reactions. Yeast extract also provides antioxidants to help combat some of these reactions while possibly assisting in the trace metal dissolution due to the presence of several organic molecules which function as chelators. Through the hydrolysis studies, the yeast extract was shown to be composed of peptides heavily consisting of glycine, lysine and proline. Yeast extract also contains a significant amount of nucleic material, mostly from RNA due to the presence of uridine. Further, several B-vitamins were quantified, including significant amounts of B3 and myo-inositol, each more than 10x their current respective defined supplementation. Metabolic studies of Spodoptera frugiperda Sf-9 cell cultures in media containing hydrolysates helped to illuminate which compounds are active metabolites over the initial growth phase as well as determining any compounds which become completely exhausted. However, consistent cell growth after the commercial media was diluted sufficiently over 3 passages was only obtained with one of the yeast extract lots studied, possibly highlighting deeper concerns with the manufacturing process overall. Along with a thorough literature review, all of this data was combined into a chemically defined supplement to replace the yeast extract. No significant growth was obtained once the commercial media had been diluted from the system over several passages. This suggests that only a small amount of the crucial growth promoting compound is required, but more rigorous investigations (e.g. GC-MS, fractionation analysis) are still required to pinpoint its identity.