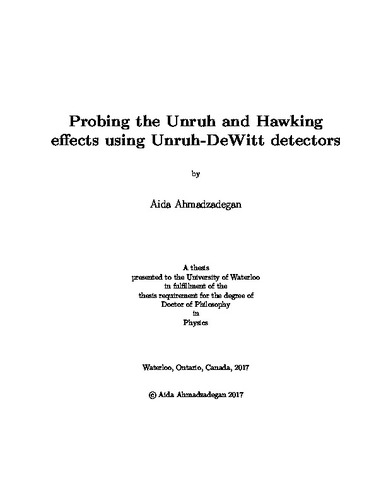 Quantum field theory is so far the best description of the fundamental laws of Nature, yet it does not fully incorporates gravitation. The first attempt toward unifying the quantum field theory and gravity is a semi-classical theory of gravity, that in its basic form treats the gravitational background as fixed and focuses on the dynamics of matter fields instead. Well-known phenomena such as the Unruh effect and Hawking radiation provide elegant partial unification of these theories but still present a number of unresolved issues. One can attempt to address some of these challenging issues by relying on the semi-classical theory of gravity but not all of them are resolvable in the absence of a complete theory of quantum gravity, without fully incorporating both principles of general relativity and quantum theory. In recent years, however, the core ideas of quantum field theory combined with basic concepts of quantum information theory such as quantum entanglement have provided powerful approaches to address such questions. Perhaps quantum information theoretic methods could be a step towards uncovering the fundamental principles of quantum gravity. In this context, the new sub-discipline of relativistic quantum information underlies the present thesis. Here, the fundamental features of radiation-matter interaction are explored in various physical settings of quantum field theory in curved spacetimes using Unruh-DeWitt particle detectors. In the first part of this thesis, a new model for computing the response of a particle detector in localized regions of general curved spacetimes is introduced to circumvent the mathematical complexity of standard methods for calculating the response function. Also, signatures of transition probabilities of atoms that are relativistically moving through optical cavities are shown to be very sensitive to their spatial trajectories. This allows to use internal atomic degrees of freedom to measure small time-dependent perturbations in the proper acceleration of an atomic probe, or in the relative alignment of a beam of atoms and a cavity. Further, the extent to which the Unruh spectrum of non-uniformly accelerated trajectories can be modulated and carry information is determined. Invoking the equivalence principle, one can argue that these results indicate that Hawking radiation could also be correspondingly strongly modulated and could, therefore, be carrying away significant amounts of information. Furthermore, showing how and to what extent the Unruh effect can be amplified is of interest in developing its experimental probes. The last topic that is considered in this work concerns foundational issues associated with relativistic quantum information. Motivated by recent suggestions that gravity might remain classical, and by claims that Gaussian quantum mechanics is effectively a classical theory, the dynamics of a hybrid classical-quantum system is investigated. While many explicit quantum effects can be represented classically, we demonstrate that quantum aspects of the system cannot be fully masked. These results could have implications for the no-cloning theorem, quantum teleportation, and the Einstein-Podolski-Rosen (EPR) thought experiment. Also they could be of importance in the ongoing discussion as to whether or not gravity should be quantized.