Impacts of Transit-Oriented Development (TOD) on the Travel Behavior of its Residents in Shenzhen, China 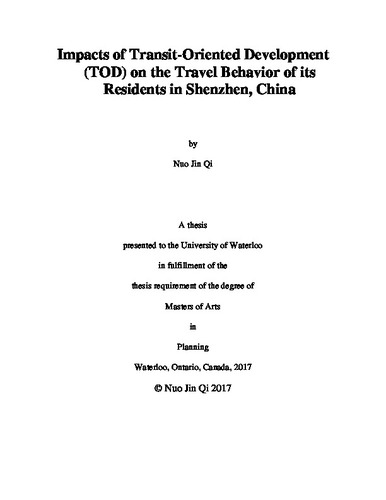 Rapid urbanization in cities across the world has generated a number of issues including urban sprawl, segregation of land uses, traffic congestion and negative environmental impacts. Transit-oriented development (TOD) has been considered as the best urban development strategy and planning tool to approach these challenges. It is widely adopted as the urban development guide by planners and decision makers in North America and all over the world. TOD has been practiced by many different cities across the world since the early 1990s, however, its concept and practices in China are still at its experimental stage. The study identifies that implementation of TOD in existing high-density urban spaces is a major challenge in China. A common goal of any successful TOD is to reduce automobile dependency, and encourage the use of public transit (e.g. subway, LRT, bus) and other sustainable travel modes (e.g. walking and cycling). This thesis aims to explore the effectiveness of TOD practices in Shenzhen by assessing the impact to the residents’ travel behavior at the neighbourhood level. Two TOD practices have been selected to be further analyzed in this study – Grand Theatre Station and Houhai Station. Grand Theatre Station is located within the old urban centre, and Houhai station is considered to be a more conventional TOD design which is located in a reclamation area. To conduct the analysis, data is collected from Shenzhen subway authorities, field observations and survey. All the information is visualized using maps and descriptive statistics. The result showed that both sites have experienced a significant growth in subway ridership since the implementation of TOD. Furthermore, TOD practice at Grand Theatre Station is significantly more effective comparing to Houhai Station. With further analysis of the differences between the two cases, three key qualities have been summarized to provide different insights for planners to improve TOD practices in China, they include “rich mix of residential and commercial types”, “walkability/connectivity”, as well as “quality of subway services”. These qualities will be further explored in the study.

Nuo Jin Qi (2017). Impacts of Transit-Oriented Development (TOD) on the Travel Behavior of its Residents in Shenzhen, China. UWSpace. http://hdl.handle.net/10012/12560