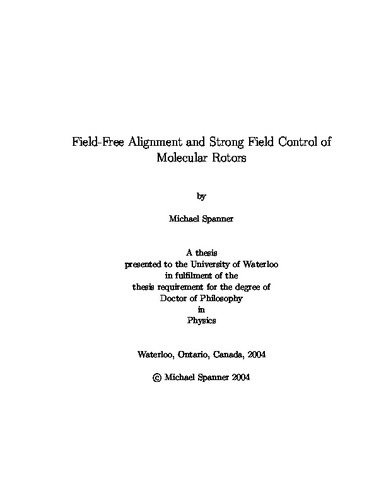 Methods of controlling molecular rotations using linearly polarized femtosecond and picosecond pulses are considered and analyzed theoretically. These laser pulses, typically in the infrared, are highly non-resonant with respect to the electronic degrees of freedom of the molecules and have intensities of &sim; 10^13 to 10^14 W/cm&sup2;. It is shown how these laser pulses can force small linear molecules to align with the direction of the electric field vector of the laser both in the presence of the laser field as well as after the application of a short laser pulse. Recent experiments on laser-induced molecular alignment are modeled and excellent agreement between experiment and theory is found. Additional methods of controlling molecular rotational dynamics are outlined. The first method considers the forced rotational acceleration of diatomic molecules, called the <i>optical centrifuge</i>. Here, the direction of polarization of a linearly polarized laser field is made to smoothly rotate faster and faster. The molecules, which tend to align with the polarization vector of the laser field, follow the rotation of the laser polarization and are accelerated to high angular momentum. The second method considers the control of field-free rotational dynamics by applying phase shifts to the molecular wave function at select times called <i>fractional revivals</i>. At these select moments, an initially localized wave function splits into several copies of the initial state. Adding phase shifts to the copies then induces interference effects which can be used to control the subsequent evolution of the rotational wave function. This same control scheme has a close link to quantum information and this connection is outlined. Finally, a recently proposed method of controlling the quantum dynamics of the classically chaotic kicked rotor system [J. Gong and P. Brumer, Phys. Rev. Lett. 86, 1741 (2001)] is analyzed from a phase space perspective. It is shown that the proposed quantum control can be linked to small islands of stability in the classical phase space. An experimentally feasible variant of this control scenario using wave packets of molecular alignment is proposed. Two applications of molecular alignment are discussed. The first application uses field-free aligned molecules as a non-linear medium for compression of a laser pulse to the 1 fs regime at optical wavelengths. At such durations, these laser pulses contain nearly a single oscillation of the electric field and represent the shortest laser pulses physically achievable for such frequencies. The second application uses molecular alignment to create a sort of gas phase "molecular crystal" which forms a basis for laser-induced electron diffraction and imaging of the aligned molecules. Here, a first laser pulse aligns the molecules in space. A second laser pulse is then used to ionize outer-shell electrons, accelerate them in the laser field, and steer them back to collide with the parent ion creating a diffraction image with sub-femtosecond and sub-Angstrom resolution.