Numerical Simulation of Hydrocarbon Fuel Dissolution and Biodegradation in Groundwater 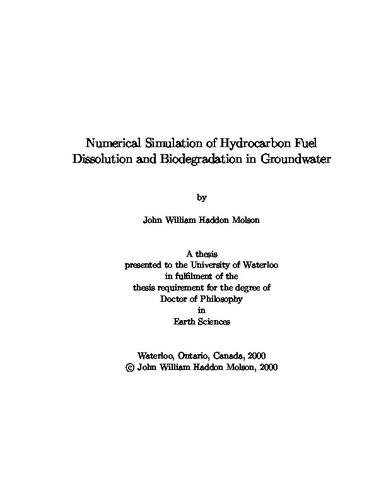 The behaviour of hydrocarbon fuels in contaminated groundwater systems is studied using a multicomponent reactive transport model. The simulated processes include residual NAPL dissolution, aerobic and anaerobic biodegradation with daughter-product transport, and transport of a reactive carrier with mixed equilibrium/kinetic sorption. The solution algorithm is based on a three-dimensional Galerkin finite element scheme with deformable brick elements and capacity for a free watertable search. Nonlinearities are handled through Picard iteration. Convergence is rapid for most applications and mass balance errors for all phases are minimal. The model is first applied to simulate a pilot scale diesel fuel dissolution experiment in which humic acid is used as a natural organic carrier to enhance dissolution and to promote biodegradation of the aqueous components. The pilot scale experiment is described by Lesage et al. (1995) and Van Stempvoort et al. (2000). The conceptual model includes 8 unique components dissolving from 500 mL of residual diesel fuel within a 3D saturated domain. Oxygen-limiting competitive aerobic biodegradation with a dynamic microbial population is also included. A mixed 2-site equilibrium/kinetic model for describing sorption of the carrier to the aquifer solids was adopted to reproduce the observed breakthrough of the humic acid and organic components. Most model parameters were obtained independently with minimal calibration. Batch sorption data were found to fit well at the pilot scale, however biodegradation and dissolution rates were not well known and had to be fitted. Simulations confirmed the observed 10-fold increase in effective solubility of trimethylnaphthalene, and increases on the order of 2-5 for methyl- and dimethylnaphthalene. The simulated plumes showed almost complete attenuation after 5 years, in excellent agreement with observed data. A sensitivity analysis showed the importance of carrier concentrations, binding coefficients, dissolution and biodegradation rates. Compared to a dissolution scenario assuming no carrier, the humic acid-enhanced dissolution case decreased the remediation time by a factor of about 5. The second application of the model involves simulating the effect of ethanol on the persistence of benzene in gasoline-impacted groundwater systems. The conceptual model includes a 4-component residual gasoline source which is dissolving at the watertable into a 3D aquifer. Comparisons are made between dissolved plumes from a gasoline spill and those from an otherwise equivalent gasohol spill. Simulations have shown that under some conditions, a 10% ethanol component in gasoline can extend the travel distance of a benzene plume by at least 150% relative to that from an equivalent ethanol-free gasoline spill. The increase is due to preferred consumption of oxygen by ethanol and a corresponding reduction in the biodegradation rate of benzene while the two plumes overlap. Because of differences in retardation however, the ethanol and benzene plumes gradually separate. The impact therefore becomes limited because oxygen rapidly disperses behind the ethanol plume and benzene degradation eventually resumes. A sensitivity analysis for two common spill scenarios showed that background oxygen concentrations, and benzene retardation had the most significant influence on benzene persistence. A continuous gasohol spill over 10 years was found to increase the benzene travel distance by over 120% and a pure ethanol spill into an existing gasoline plume increased benzene travel distance by 150% after 40 years. The results are highly relevant in light of the forthcoming ban of MTBE in California and its likely replacement by ethanol by the end of 2002.