The Influence of Dual-tasking on Cortical Responses Associated with Instability 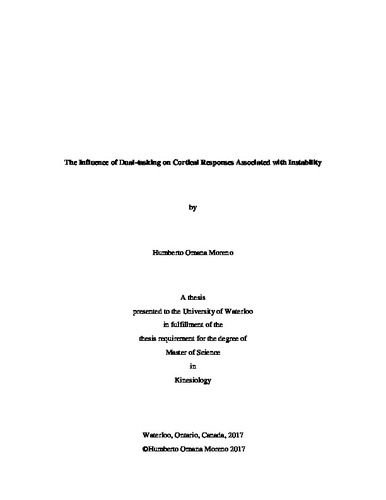 Recent literature has revealed evidence of cortical involvement in reactive balance control. Using electroencephalography, event-related potentials (ERP) have been shown to be consistently evoked in response to a perturbation to balance. The most widely studied ERP, the N1, is speculated to be associated with resource reallocation in response to instability. A link between perturbation amplitude and N1 amplitude exists, suggesting exogenous attention can influence the N1 response. Thus, it may be expected that manipulating the focus of attention prior to the onset of a perturbation will change the amplitude of evoked cortical responses. In order to explore the link between attention and the N1 perturbation evoked cortical potential the current thesis explored the impact of dual-task performance on characteristics of the N1 and subsequent balance reactions. It was hypothesized attending to a cognitive task would lead to an N1 attenuation only in the small amplitude perturbation trials, not the large amplitude trials. Twelve, healthy adults participated in a study in which perturbations were applied using a lean-and-release protocol. A combination of two main tasks were assessed: perturbation amplitude and dual-task challenge. Changes in perturbation amplitudes were mediated by a hydraulic device slowing down the participant’s acceleration, while dual-tasking was accomplished using a visuomotor tracking task. Results show dual-tasking led to the attenuation of the N1 peak amplitude regardless of the amplitude of the perturbation applied. However, the study did not reveal a scaling of the N1 to the different amplitudes of perturbation. The N1 appears to be associated with attention reallocation with little evidence towards the idea the N1 is related to the motor control in later phases of a balance reaction. Future studies should continue to draw parallels between attentional and reactive balance networks by exploring perturbation amplitudes and dual-task difficulty influences on the N1 peak amplitude.