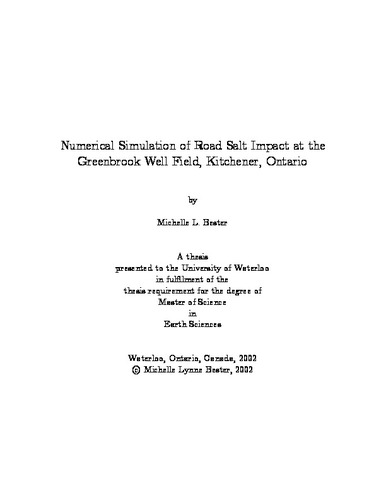 Chloride concentrations at the Greenbrook well field in Kitchener, Ontario, have been steadily increasing over the past several decades and may soon pose a threat to drinking water quality. Drinking water limits at some wells have already been exceeded. The Regional Municipality of Waterloo (RMOW) relies mainly on local groundwater resources for its drinking water supply, and the Greenbrook well field is the oldest of 50 municipal well fields contributing to this supply. Urban growth and the expansion of city limits over the years has surrounded the well field, placing it in a high risk area in need of protection. As such, protection of this water supply is essential until alternative sources can be found. Road salt has been identified as the prime source of the chloride contamination, and various management alternatives and remediation strategies are currently being studied. In order to characterize the behaviour of chloride in the subsurface, an understanding of the mechanisms that control travel of chloride to the water table and through the groundwater system is needed. For the first phase of this work, a 2-D variably-saturated flow and transport model (SWMS-2D) was used to evaluate the effect of seasonal fluctuation in chloride loading to a generic aquifer system. Chloride was applied over the surface of the model in seasonal pulses that correlated with temperature and precipitation. The model showed a dampening of the seasonal response with depth that lead to the conclusion that long-term transport models can neglect seasonal changes in solute loading. For the second phase of this work, a proven 3D finite element transport model (Waterloo Transport Code: WTC) was used to simulate road salt impacts to the well field. Road salt was applied over selected roads throughout the steady-state capture zone via a type 3 (Cauchy) boundary that varies both temporally and spatially with road type and location. After calibrating the model from 1945 to 2002 to chloride concentrations using the weighted average of 5 Greenbrook production wells, the model was run to the year 2041 to assess future implications. Remediation strategies were also investigated via 6 predictive scenarios in which chloride applications were reduced by varying degrees. The results of this phase will be used by the RMOW in cost-benefit analyses of alternative de-icing approaches versus de-chlorination treatment of the well water.