Paleolimnological evidence of the effects of recent cultural eutrophication and climatic variability during the last 300 years in Lake Malawi, East Africa 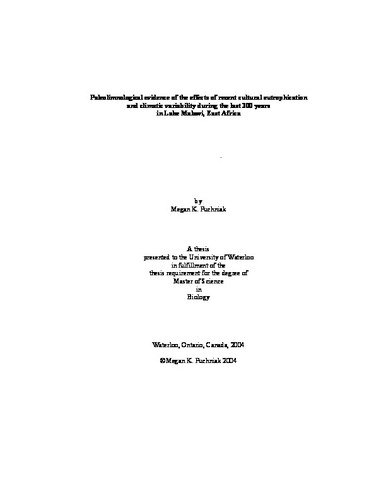 Lake Malawi is the second largest lake in Africa, supporting diverse populations of endemic cichlids and supplying essential water resources to Malawi, Mozambique and Tanzania. However, population growth, rapid deforestation and intensive agriculture, especially in the southern catchments, have accelerated soil erosion during the last half century. These anthropogenically-disturbed catchments have caused rivers to transport greater sediment loads into Lake Malawi than rivers within forested catchments. Lake Malawi?s immense size and oligotrophic nature may retard detection of inputs of external contaminants. Reversing the effects of increased nutrient loading to Lake Malawi once observed would likely take generations, as the residence time of water is over 140 years. Therefore, sensitive metrics are required to assess the effects of land use change and climate variability in Lake Malawi in advance of deleterious effects. In this study, paleolimnological analyses of four sediment cores collected in 1997 and 1998 along a longitudinal transect of Lake Malawi, dated with <sup>210</sup>Pb analyses and analyzed for biogenic silica and sedimentary diatom assemblages, were used to create a long-term water quality dataset. These four sites span gradients of land use and latitude in order to reconstruct limnological conditions over the whole lake during the last 300 years. Paleoecological results indicate that patterns of diatom assemblage change are not uniform lake wide. Southern cores contain evidence of nutrient enrichment starting as early as ca. 1940, indicated by increased silica, carbon and nitrogen burial. By ca. 1970, increased rates of sedimentation, diatom influx and changes in diatom community composition, characterized by increased percent abundance of eutrophic diatom taxa, are attributable to accelerated enrichment by terrestrial soil erosion. The succession of diatoms in southern Lake Malawi begins with high percent abundance of <i>Aulacoseira nyassensis</i> and <i>Fragilaria africana</i>, which thrive in nutrient-rich waters, followed by a shift towards diatom taxa with reduced silica requirements by ca. 1980 (e. g. <i>Stephanodiscus nyassae, S. minutulus, S. muelleri, Cyclostephanos</i> and small <i>Nitzschia</i> species. ), a pattern comparable to the eutrophication-induced decline in silica to phosphorus ratios in Lake Victoria. In Lake Malawi, evidence of eutrophication extends to the mid lake as indicated by similar diatom assemblage changes in the sediment core from the central region. Diatom stratigraphies from the north end of the lake indicate no observable impacts of land use change on the northern basin of Lake Malawi during the past 350 years. However, a nine-meter rise in water level ca. 1860 AD appears to have resulted in elevated diatom influxes at that time comparable to the recent eutrophication-induced diatom influxes of the southern cores. The effects of this rise in water level was recorded in all three measured sites, southern, central and northern Lake Malawi, indicating lake-wide increased productivity, yet changes to the diatom community composition were imperceptible. This study shows evidence of recent cultural eutrophication altering limnological conditions with impacts to the biogeochemical cycling of silica, the available silica to phosphorus ratios and the biotic communities of a large portion of Lake Malawi. Thus, providing an early warning that proper stewardship of Lake Malawi requires effective management of land-use practices within the catchment to reduce soil erosion and avoid widespread water quality deterioration of this great lake.