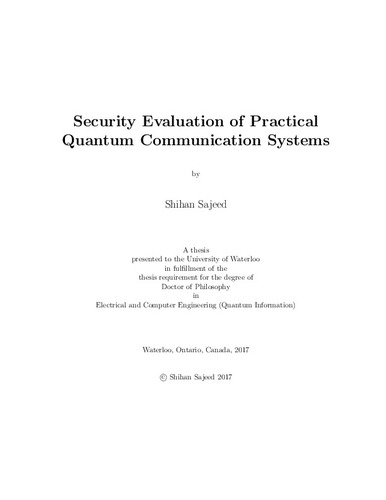 Modern information and communication technology (ICT), including internet, smart phones, cloud computing, global positioning system, e-commerce, e-Health, global communications and internet of things (IoT), all rely fundamentally - for identification, authentication, confidentiality and confidence - on cryptography. However, there is a high chance that most modern cryptography protocols will be annihilated upon the arrival of quantum computers. This necessitates taking steps for making the current ICT systems secure against quantum computers. The task is a huge and time-consuming task and there is a serious probability that quantum computers will arrive before it is complete. Hence, it is of utmost importance to understand the risk and start planning for the solution now. At this moment, there are two potential paths that lead to solution. One is the path of post-quantum cryptography: inventing classical cryptographic algorithms that are secure against quantum attacks. Although they are hoped to provide security against quantum attacks for most situations in practice, there is no mathematical proof to guarantee unconditional security (`unconditional security' is a technical term that means security is not dependent on a computational hardness assumption). This has driven many to choose the second path: quantum cryptography (QC). Quantum cryptography - utilizing the power of quantum mechanics - can guarantee unconditional security in theory. However, in practice, device behavior varies from the modeled behavior, leading to side-channels that can be exploited by an adversary to compromise security. Thus, practical QC systems need to be security evaluated - i.e., scrutinized and tested for possible vulnerabilities - before they are sold to customers or deployed in large scale. Unfortunately, this task has become more and more demanding as QC systems are being built in various style, variants and forms at different parts of the globe. Hence, standardization and certification of security evaluation methods are necessary. Also, a number of compatibility, connectivity and interoperability issues among the QC systems require standardization and certification which makes it an issue of highest priority. In this thesis, several areas of practical quantum communication systems were scrutinized and tested for the purpose of standardization and certification. At the source side, the calibration mechanism of the outgoing mean photon number - a critical parameter for security - was investigated. As a prototype, the pulse-energy-monitoring system (PEMS) implemented in a commercial quantum key distribution (QKD) machine was chosen and the design validity was tested. It was found that the security of PEMS was based on flawed design logic and conservative assumptions on Eve's ability. Our results pointed out the limitations of closed security standards developed inside a company and highlighted the need for developing - for security - open standards and testing methodologies in collaboration between research and industry. As my second project, I evaluated the security of the free space QKD receiver prototype designed for long-distance satellite communication. The existence of spatial-mode-efficiency-mismatch side-channel was experimentally verified and the attack feasibility was tested. The work identified a methodology for checking the spatial-mode-detector-efficiency mismatch in these types of receivers and showed a simple, implementable countermeasure to block this side-channel. Next, the feasibility of laser damage as a potential tool for eavesdropping was investigated. After testing on two different quantum communication systems, it was confirmed that laser damage has a high chance of compromising the security of a QC system. This work showed that a characterized and side-channel free system does not always mean secure; as side-channels can be created on demand. The result pointed out that the standardization and certification process must consider laser-damage related security critical issues and ensure that it is prevented. Finally, the security proof assumptions of the detector-device-independent QKD (ddiQKD) protocol - that restricted the ability of an eavesdropper - was scrutinized. By introducing several eavesdropping schemes, we showed that ddiQKD security cannot be based on post selected entanglement. Our results pointed out that testing the validity of assumptions are equally important as testing hardware for the standardization and certification process. Several other projects were undertaken including security evaluation of a QKD system against long wavelength Trojan-horse attack, certifying a countermeasure against a particular attack, analyzing the effects of finite-key-size and imperfect state preparation in a commercial QKD system, and experimental demonstration of quantum fingerprinting. All of these works are parts of an iterative process for standardization and certification that a new technology - in this case, quantum cryptography- must go through before being able to supersede the old technology - classical cryptography. I expect that after few more iterations like the ones outlined in this thesis, security of practical QC will advance to a state to be called unconditional and the technology will truly be able to win the trust to be deployed on large scale.