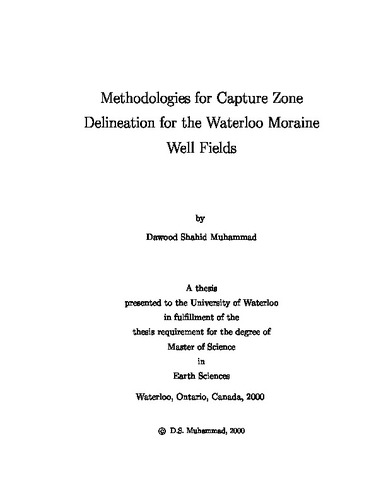 The Region of Waterloo relies mainly (75 %) on local groundwater resources for its drinking water supply. The water demand is increasing with the growth of the population and there is a need to enhance the present water supplies. The Regional Municipality of Waterloo (RMOW), which is the governing body in charge of providing the drinking water supply, is conducting an extensive program to protect the groundwater resources of the Waterloo Moraine aquifer. The focus of that work is defining the wellhead protection areas of the existing production wells as well as the investigation of potential further water supply. The main goal of the work presented here is to delineate the capture zones for the major well fields of the Region. To achieve that goal, the flow for the expected pumping conditions is simulated using a fully 3D finite element model (WATFLOW) which has been proven to be highly flexible to represent the natural boundaries and the highly irregular stratigraphy by previous researchers and scholars. The modified version of this model which includes a pseudo-unsaturated module is used for the solution of flow equation. For the delineation of capture zones, a new particle tracking code (WATRAC) as well as two advective-dispersive transport models are used by using a probabilistic approach presented by Neupauer and Wilson [1999]. For the probabilistic approach (Wilson's method), two transport models, a conventional time-marching code (WTC) and a time-continuous code (LTG) are usedand their results are compared. The LTG is computationally more efficient than the WTC, but it gives oscillatory results close to the steady state condition. A combined used of LTG and WTC istherefore recommended to obtain the steady state capture zones. The 0. 25 probability contour agrees very well with the particle tracks, except for somewhat greater transverse spreading due tothe dispersion which is not considered by the particle tracking algorithm. Both methods, backward particle tracking and probabilistic advective-dispersive modelling are clearly more informative and give better insight when considered together than each by itself.