'The Best Covered War in History': Intimate Perspectives from the Battlefields of Iraq 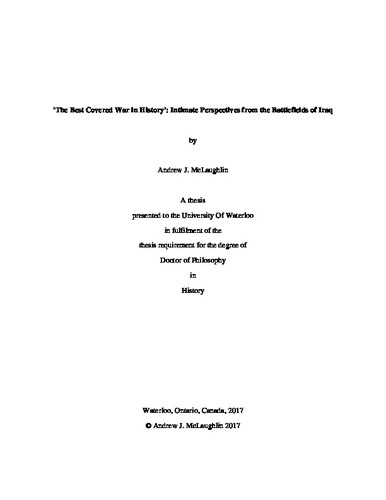 This study examines combat operations from the 2003 invasion of Iraq from the “ground up.” It utilizes unique first-person accounts that offer insights into the realities of modern warfare which include effects on soldiers, the local population, and journalists who were tasked with reporting on the action. It affirms the value of media embedding to the historian, as hundreds of journalists witnessed major combat operations firsthand. This line of argument stands in stark contrast to other academic assessments of the embedding program, which have criticized it by claiming media bias and military censorship. Here, an examination of the cultural and social dynamics of an army at war provides agency to soldiers, combat reporters, and innocent civilians caught in the crossfire.