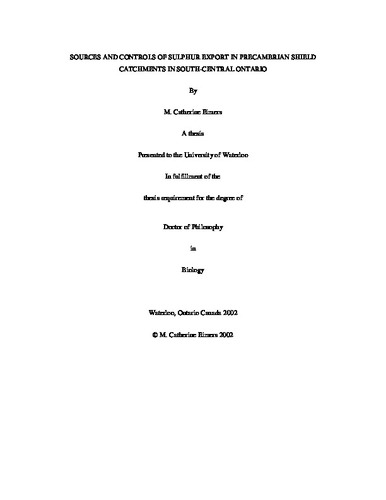 A series of studies was undertaken at Plastic Lake-1 (PC1) to determine the sources and controls on S cycling in small headwater catchments on the Precambrian Shield in south-central Ontario. Two observations were made about the S cycle in this region: (1) all streams exhibit highly coherent temporal patterns in SO4 concentrations and export, and (2) most catchments exported more SO4 in stream water than is received in bulk deposition during the past 2 decades. Synchronous temporal patterns in annual SO4 concentrations in both upland and wetland-draining streams were related to changes in climate, specifically those factors that determine catchment dryness. The number of days with no stream flow or stream flow below a critical threshold was a good predictor of the average stream SO4 concentration in a particular year. Sulphate chemistry in the PC1 outflow is highly dependent on processes occurring in a conifer <i>Sphagnum</i> swamp located immediately upstream of the chemical sampling station. Hydrologic inputs to the swamp during the summer determine whether S is retained or released from peat on an annual basis. Drying and re-wetting of <i>Sphagnum</i>-derived peat caused a substantial increase in soluble SO4 in laboratory experiments, which was slightly enhanced at higher temperature, but alternating moisture conditions had no immediate effect on <i>Sphagnum</i>. Despite large inter-annual changes in SO4 release, over the long-term (<i>i. e. </i> 20-years) SO4 inputs and exports from the swamp are in approximate balance. In contrast, the upland portion of PC1 (<i>i. e. </i> PC1-08) consistently exports more SO4 than is input in bulk deposition in every year of record. Even when inputs are increased to account for potential underestimates in dry deposition or weathering, the majority of catchments in this region exhibit net export in many years. Two internal sources are suggested to account for negative budgets: desorption and mineralization. Adsorption/desorption reactions respond directly to changes in SO4 input concentration, and lysimeter data indicate the importance of these processes for buffering short-term changes in SO4 concentration in LFH percolate. Desorption may be the primary direct response of upland soil to decreasing SO4 inputs in deposition and may substantially extend the period of net SO4 export in catchments that have large adsorbed SO4 pools such as PC1. However, the adsorbed pool may be sustained by continuous net release from mineralization, and should also be considered in budget calculations. Mineralization was shown to be responsive to drying and re-wetting events and temperature, although results varied among different materials. Sulphate release from mineral soil did not appear to be influenced by changing moisture, temperature or deposition chemistry in laboratory experiments, although adsorption/desorption reactions may have largely masked small changes in SO4 release <i>via</i> mineralization. The magnitude of organic S storage in mineral soil indicates that this pool could be an important source of export over the long-term. While it is unknown why (or if) mineralization is a net source of SO4 to drainage streams, changes in climate and/or deposition could potentially influence SO4 release from organic compounds. Soil moisture and temperature are important controls on microbial processes in soil, and changes in climate that bring about changes in soil moisture or temperature conditions could affect decomposition and mineralization processes. Similarly, historically high inputs of S and N in deposition may have brought about slow shifts in litter quality (<i>i. e. </i> decreased C:N, C:S) which could also potentially influence decomposition and mineralization rates. In order to predict the future response of surface water chemistry to changes in SO4 (and N) deposition, it is important to consider not only the magnitude of S pools in soil, but also the potential for SO4 cycling between pools. Likewise, models that predict changes in stream SO4 by adsorption isotherm data alone will underestimate the importance of desorption unless the potential for continual replenishment of the adsorbed pool through the relatively slower process of mineralization is also considered. In general, predictions of recovery from S deposition can only be made from a complete understanding of S pools, transformations, and the effects of climate, which are superimposed upon the long-term trend in deposition.